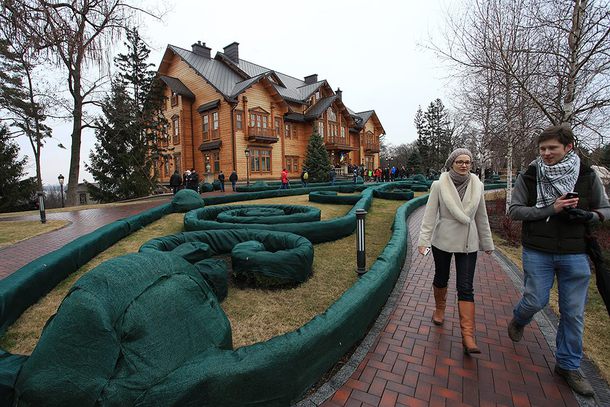 Ukraine is caught in the middle of political turmoil in the wake of the departure of President Viktor Yanukovych. It is also beset with the aggression shown by Russian President Vladimir Putin, whose forces have effectively taken control of Ukraine’s Crimea region. And in the middle of this is what the civil watchdog group Transparency International is calling “Ukraine’s revolution against corruption.”

Many things caused Ukrainians to rise up in protest over the past several months. Dismay at seeing Yanukovych embrace Russia instead of the European Union had a big part. But so did a collective revulsion against the profound corruption of Yanukovych and his inner circle.

Nothing epitomizes the excesses of Viktor Yanukovych more than his palatial estate, Mezhyhirya. The massive house and its 137 hectare estate on the Dnieper River outside Kiev have been valued at more than $75 million (US). And, The New York Times says Yanukovych has recently been building yet another mega-mansion at Laspi, on the shore of the Black Sea near Sevastopol.

When Yanukovych served as Prime Minister in 2006, he lived at and engineered the privatization of Mezhyhirya. Then, when Yanukovych became President of Ukraine in 2010, he reportedly had the deed to the estate registered in the name of several European companies. And, he built the estate’s present-day baronial log castle.

Yanukovych’s tastes appeared to be as lavish as Iraq’s Saddam Hussein. Each of the mansion’s Lebanese cedar doors cost $64,000, according to Sergii Leshchenko, deputy editor-in-chief of Ukrainska Pravda. Three sets of wooden paneling for staircases, he says, came in at $200,000. Leshchenko says that in the course of one and a half years the overall cost of fittings imported for Mezhyhiriya was $9,416,000.

The shuffling of ownership deeds has continued along with the lavish upgrading of the estate. Mezhyhiriya is now officially owned by “Tantalit,” a company in the Ukrainian city of Donetsk. That, in turn, is a subsidiary of an Austrian concern, which in itself is 100% owned by a British company. To observers, it’s all a “shell game” to obscure Yanukovych’s assets.

At least Mezhyhiriya and the new mansion in Lapsi are physical property that the state can take over. A more daunting challenge is the recovery of assets that have moved overseas into disguised corporations and secret bank accounts.

As for the United Kingdom, Transparency International UK Executive Director Robert Barrington has sent a letter to British Chancellor of the Exchequer George Osborne stating that “Financial services providers, professional service firms, and other at-risk sectors in the UK have a critical role to play at this time to ensure that suspicious corrupt assets are not laundered into and through the UK.”

Transparency International – Ukraine Executive Director Oleksii Khmara told the Guardian newspaper on February 25 that there is plenty of western culpability here. “The Ukrainian elites,” Khmara says, “have, for years, salted away ill-gotten gains throughout the EU while the authorities, specifically in the UK, Germany, Austria, the Netherlands, Switzerland and Latvia, failed to apply their anti-corruption and anti-money laundering legislation to stop them.”

The Kiev-based independent “Anti-Corruption Action Center” is also calling for the freezing of Yanukovych-related bank accounts. Along with the departed president and his son Oleksander, the Center also targets Yanukovych insiders Andriy and Serhiy Kliuyev, who own more than 70 Ukrainian concerns through the shell of two Austrian holding companies. In recent days, Andriy Kliuyev served as Yanukovych’s chief of staff and was reportedly wounded.

Another “insider” the Center wants to confront is Oleksandr Yefremov, who has been Chairman of the Party of Regions, Yanukovych’s party, in Ukraine’s parliament since 2012. His financial assets are organized under a U.S. incorporated entity called TBM Holdings, with a subsidiary in the British Virgin Islands. Yefremov also controls a group of industrial entities that profit from government tenders in the Luhansk Region of Ukraine.

Anders Aslund, with the Washington-based Peterson Institute for International Economics, says Yanukovych and his so-called “family” of insiders have siphoned off enough to equal the $30 billion deficit Yanukovych has run up since taking office in 2010. He says there were three areas being exploited – Ukraine’s State Tax Administration and its Customs Committee, from which as much as $5 billion a year was being embezzled. A second area was state infrastructure projects, which he says cost twice what they should – enabling the excess to be illicitly banked. The third sector, is the state oil and gas company Naftogaz. Aslund says it buys natural gas at an artificially low price, and then resells, with the difference put in the pockets of the “family.”

For Ukraine, the challenge going forward is to build a new system of anti-corruption controls – and sticking to them – to lift the state out its ranking as 144th out of 177 countries in 2013 according to Transparency International.

Standing in the way of that, according to George Friedman, Chairman of intelligence aggregator Stratfor, is the continuation of official greed. “The Yanukovych government was rotten to the core,” Friedman states, adding “but most governments of Ukraine will be rotten to the core, partly because there is no tradition of respect for the law, and because of the way property was privatized [when Ukraine became independent.]” Friedman says the oligarchs who bought up everything for sale “now own Ukraine, and however much the crowd despises them, it can’t unseat them.” He says these people “can eliminate their critics or bribe them into silence.”

Transparency International – Ukraine says it wants lawmakers to immediately establish an anti-corruption infrastructure with independent policy and enforcement bodies. TI says it disagrees with the present proposal to create deputy ministerial posts focused on fighting corruption, asserting that such individuals would not have the needed independence, mandate, and the tools to fight corruption.

As a new government is formed, and people run for offices, Transparency says candidates must make their property, income, and expenditures public, along with their financial obligations, so that society can evaluate the possible integrity risks of candidates.

And, to further control corruption in Ukraine, TI is pushing for parliament to enact new laws on conflicts of interest. It also calls for an open public procurement system in Ukraine’s ten largest cities.

Meanwhile, Yanukovych has resurfaced in the Russian city of Rostov-on-Don, and has been recognized by President Putin as still being Ukraine’s legitimate leader. The Russian president says a written request by Yanukovych for military assistance has been acted upon, giving his excursions into Crimea a veneer of legitimacy.

But Transparency International is also calling for the strongest possible actions against Russia over its taking control of Crimea. TI is urging the EU, the United States, NATO, and the Organization for Security and Cooperation in Europe (OSCE) to immediately consider providing military assistance to protect the territorial integrity of Ukraine. TI is also calling on the international community to immediately apply economic sanctions against Russia, something a number of EU member states are pressing for. 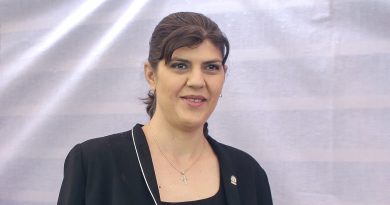 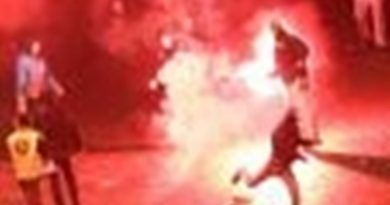