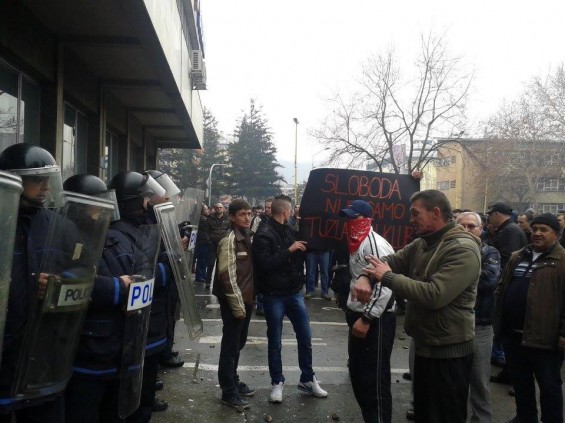 Close to 6000 disgruntled workers from Dita, Konjuh, Polihem, Resod Guming and Poliolechem companies, followed by citizens, retirees and high school students from the Electrotechnical school gathered on February 6 2014 in front of the government of Bosnia’s Tuzla Canton for another round of protests that began the previous day.

The demands of the workers remain the same, and they also demanded that the Tuzla Canton government release people who were arrested at protests on February 5. The protests are taking place against a background of economic dire straits and 44 per cent unemployment in Bosnia and Herzegovina.

Of the 27 people arrested the previous day, 24 have been released, and three are still detained. People from Sarajevo, Zenica, Bihać, Kakanj and Prijedor showed up on Thursday in front of their cantonal governments to show their support to protestors from Tuzla. Citizens of Srebrenik traveled to Tuzla by foot to join the protests. They said that this time, they are ‘’ready to go until the end’’.

While some protestors threw eggs and stones at the government building in Tuzla, others shouted “out with the government” and “thieves, thieves”.