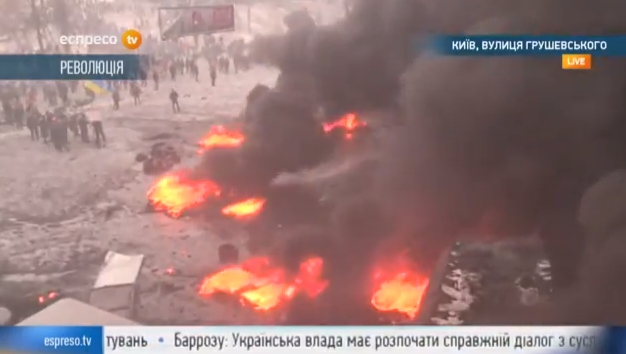 Clashes between protesters and riot police continued Wednesday in the Ukrainian capital Kyiv, killing at least three protesters, the first fatalities since the current anti-government demonstrations began in November. The U.S. State Department has condemned the violence, which erupted as sweeping new anti-protest laws came into force.

Police were met with volleys of Molotov cocktails and rocks as they stormed the demonstrators’ barricades near Independence Square Wednesday morning. At least two demonstrators were shot dead by police, according to witnnesses.

“We will continue following closely these developments as well as assessing possible actions by the European Union and consequences for our relations with that country,” he told reporters.

Russia has accused the EU and the United States of interfering in Ukraine’s domestic affairs.

“Now, with the amendments, criminal proceedings can take place in courts without the presence of the defendant,” she said. “Also the freedom of media will be substantially limited by the criminalization of libel. In addition, the laws simplify the way that members of parliament can be stripped of their immunity.”

Opposition groups blame the clashes on a little-known far-right group called “Right Sector.” Protesters also claim the government is paying people to provoke the violence as a pretext for the clampdown – a charge authorities deny.

Andrew Wilson of University College London says the ground for compromise is shrinking.

“The authorities are dug in. There are people who want to carry on the protests regardless,” he said. “And there’s an election due in February 2015; partly the opposition doesn’t think it’s ever going to be fair, so they say ‘why wait, why not protest now’.”

The protests erupted in November after Ukraine backed out of an Association Agreement with the European Union. Instead, President Viktor Yanukovytch signed energy and loan deals with old ally Russia.

According to Lutsevych, the debate over Ukraine’s future direction — east to Russia or west to Europe — has split the country.

“The tipping point could be which part of this population will be more determined to define the future. And to my observations, part of the population in the east is so far more of a passive observer,” she said.

In defiance of the new laws, thousands of protesters began to regroup in Kiev’s Independence Square Wednesday evening. Among them was Andrei Avramenko, who said that if the protesters lose then everything will be even worse, adding that “we will need to stand our ground”.

Analysts say the fatalities mark a new chapter in Ukraine’s deepening political crisis – galvanizing the protests, with neither side prepared to give any ground.

(Throughout the day, protesters burned old tires to slow down the police attacks they expected. Screenshot from Ukrainian broadcaster Espresso TV, via @nycjim/twitter.com) 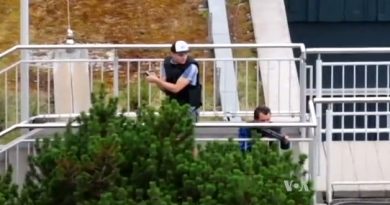