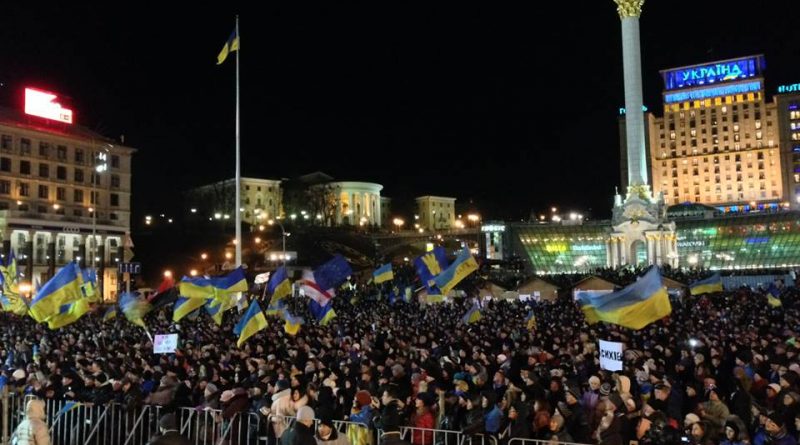 Three former Ukrainian presidents have endorsed ongoing anti-government demonstrations in Kyiv aimed at ousting President Viktor Yanukovych for backing out of a trade deal with the European Union.

Wednesday’s joint statement by the three former Ukrainian heads of state – Leonid Kravchuk, Leonid Kuchma and Viktor Yushchenko – backing the protests came as U.S. Secretary of State John Kerry, speaking in neighboring Moldova, said Ukrainians have the right to choose their own future without foreign interference.  Kerry appeared to be referring to claims that economic and trade pressure from Moscow forced Ukraine to scuttle the EU deal.

Earlier Wednesday, as protests roiled Kyiv and other Ukrainian cities, Ukrainian Prime Minister Mykola Azarov warned protesters they could face criminal charges for their acts.  He later accused the opposition of trying to provoke violence.

Despite the warning, the Interior Ministry ordered police not to use force against peaceful demonstrators.

The protests erupted last week, after the Yanukovych government refused to sign the EU trade deal, announcing instead that it would seek to preserve and strengthen its economic lifeline with Moscow.

Earlier this year, Moscow imposed restrictions on goods from Ukraine, forcing a 25 percent drop in Ukrainian exports and dragging the Ukrainian economy into recession.

As protests in Kyiv continued Wednesday, Ukrainian negotiators headed for Moscow seeking a deal to lower fees for gas imported from Russia.  The talks are part of a push by Ukraine to ensure funding for 2014 debt repayments and gas costs estimated at $17 billion.