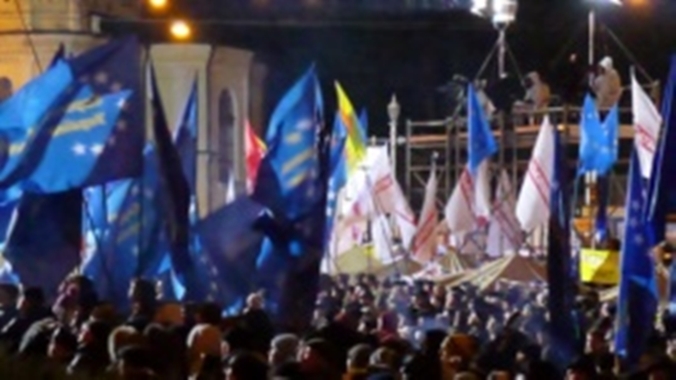 More than 100,000 protesters gathered in the center of Kyiv Sunday to express anger over the president’s refusal to sign a free trade pact with the European Union.

Riot police used tear gas and flash grenades Sunday after a few thousand protesters broke away from the peaceful rally and tried to storm a nearby administration building. Ambulances carried dozens of injured people to hospitals.

The crowd was defying a government order against demonstrations.  Sunday’s gathering was by far the largest in more than a week of daily protests.

President Viktor Yanukovych decided last week against the trade agreement with the EU, saying Ukraine needed to continue its close ties with Russia.

The announcement reverberated through an EU summit in the Lithuanian capital, Vilnius, where the president had been expected to sign the deal Friday.  Demonstrations in Ukraine demanding the president resign have grown since then.

Moscow has also in recent months imposed restrictions on Ukrainian imports, dragging the Ukrainian economy into recession and triggering a warning from Moscow of more economic difficulties if Kyiv signed the EU pact.