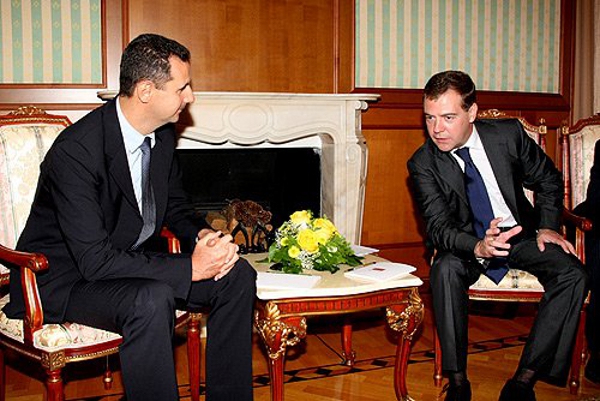 Lost in the verbal smokescreen that Russian officials throw up around the use of poison gas in Syria is one simple fact: The Kremlin holds the keys to Syria’s chemical kingdom.

But, Russian leaders show no sign of wanting to put their rusty keys in old Soviet locks.

During this period, the Soviet Union sold – or gave – Syria $26 billion in military equipment.

Despite this cornucopia of military hardware, Syria lost land wars or battles to Israel in 1967, 1973 and 1982. After the 1982 defeat, Syria started to build a chemical weapons program to try to reach military parity with Israel.

According to multiple sources, the recipes for the poisons, the equipment for the laboratories, the blueprints for the production facilities, the rockets for delivery systems, and the experts for training, came almost entirely from Soviet Union.

Some assistance came from Czechoslovakia, then an Eastern Bloc nation under Soviet control. Since the beginning, the precursor chemicals have been bought in Western Europe — large chemical brokerage houses in Holland, Switzerland, France, Austria and Germany. Many of the chemicals have dual uses – civilian and military.

“Russia keeps stressing that it is against the use of chemical weapons, but we know the Syrian arsenal dates back to the days of the USSR,” Polish Foreign Minister Radoslaw Sikorski told reporters in Warsaw last week. “It’s Soviet technology.”

The 1991 collapse of the Soviet Union gives contemporary Moscow a layer of deniability.

He said that after U.S. Defense Secretary Chuck Hagel apparently went a bridge too far in Congressional testimony. Asked by a Congressman where Syria gets its chemical weapons, Hagel had responded: “Well, the Russians supply them.”

Ivanov, who served for six years as Russia’s defense minister, added: “Until recently, I was the chairman of the government commission on export control, which exists precisely to prevent proliferation of weapons of mass destruction, their delivery systems, including chemical, biological weapons. So I know what I’m talking about.”

But there are hints that Russian involvement in Syria’s chemical program continued after the 1991 Soviet collapse.

In the 1990s, a frequent visitor to Damascus was Russian General Anatoly Kuntsevich, ironically an advisor to Russian President Boris Yeltsin on eliminating chemical weapons.

Der Spiegel, the German news magazine, wrote of Kuntsevich’s missions: “The chemical weapons expert allegedly established connections with leading members of the Syrian regime, received large amounts of money from them and, in exchange, provided them with details on how to manufacture VX, a powerful chemical agent. He reportedly also shipped 800 liters of chemicals to Syria that were required to produce the poison gas.”

Kuntsevich’s activity stopped in 2003 when he died unexpectedly on a flight from Damascus to Moscow.

In August, 2010, another retired Russian general, Yuri Ivanov, died in murky circumstances. Ivanov, who had served as deputy director of the GRU, Russia’s military intelligence agency, disappeared from a coastal Syrian town when he was reportedly on his way to meet Syrian military intelligence officers. His body was found several days later in Turkey.

In both cases, there was press speculation that the men were killed by Mossad, the Israeli intelligence agency.

For Israel, Syria’s chemical weapons capability is not a parlor game. After Syria and Iraq built large chemical weapons arsenals in the 1980s and 1990s, Israeli built what may be the world’s largest civil defense program: sensors, sirens and gas masks for each of Israel’s 8 million people.

About 20 per cent of Israel’s population is Russian speaking. In theory, Russia could draw on this population to gather even more intelligence on Syria’s chemical weapons program.

Most importantly, there are undoubtedly many alumni of Soviet military schools working for Syria’s Scientific Studies and Research Centre, the agency that oversees the nation’s chemical weapons program.

President Vladimir Putin, a former KGB officer, stands at the top of Russia’s intelligence pyramid. If he wanted to, he could make public tomorrow a list of personnel and locations involved in Syria’s program.

But Russia’s public approach is: ‘hear no evil, see no evil.’

After Radoslaw Sikorski proposed that Russia move to control Syria’s chemical program, Russia’s foreign ministry responded: “As concerns the Polish foreign policy chief’s idea that Russia should take on the responsibility for the Syrian chemical arsenals’ safety, such a presumption cannot fail to cause perplexity. Responsibility for safety of these chemical weapons lies with the government of a sovereign Syria, and nobody else. Neither internal nor external forces should try to prevent the performance of this mission or intervene in this process.”

And Russia denies all paternal responsibility.