U.S. President Barack Obama said Friday he has not made a final decision on attacking Syria, but made clear he thinks doing so would be in the interest of national security.

Syria has become a threat to the United States, he said, “by violating well established international norms against the use of chemical weapons, by further threatening friends and allies of ours in the region, like Israel, and Turkey and Jordan, and it increases the risk that chemical weapons will be used in the future, and fall into the hands of terrorists who might use them against us.”

Speaking briefly at the White House, Obama said he has consulted with the U.S. military, members of Congress and U.S. allies, as well as the wider international community.

He also made clear his frustration with the United Nations’ inability to agree on a course of action against Damascus.

“What we have seen so far at least is an incapacity at this point for the Security Council to move forward in the face of a clear violation of international norms,” Obama said.

It was a point that Secretary of State John Kerry made earlier in the afternoon, and he blamed Russia, an ally of the Syrian government.

“And because of the guaranteed Russian obstructionism of any action through the U.N. Security Council, the U.N. cannot galvanize the world to act, as it should,” Kerry said.

Russia has blocked previous attempts at the U.N. to impose sanctions on the government of Syrian President Bashar al-Assad.  Russia, however, warns that Western intervention could be destablizing to the Middle East.In a possible sign Washington may be preparing to act, a State Department official said Kerry called the foreign ministers of several countries Friday, including those in Britain, Egypt, Germany, the Netherlands, New Zealand, Saudi Arabia and the United Arab Emirates, as well as the secretary-general of the Arab League.Legacy of Iraq, Afghanistan

The administration spent Friday laying out its arguments for a response to the use of chemical weapons in Syria, as it tries to build support at home and abroad for a strike on Syria.

It was clear, however, that the legacy of more than a decade of war in Afghanistan and Iraq weighs on Obama and his advisers.  The president said he is considering a “narrow, limited” strike.He also said he is “not considering any open-ended commitment” in Syria.And Secretary Kerry said any action “will bear no resemblance to Afghanistan, Iraq or even Libya.  It will not involve any boots on the ground.  It will not be open-ended.”

Kerry acknowledged there are risks to acting against the government of President Assad, but said the risks of not acting are greater.  Not acting, he said, could embolden other countries to build and use chemical and nuclear weapons, such as Iran and North Korea. 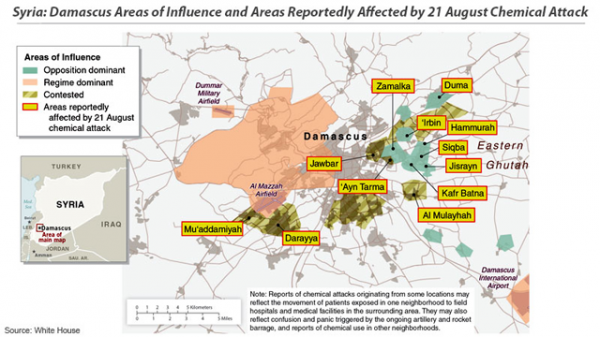 The report says 1,429 people died in the attack, at least 426 of them children.  It based the numbers on numerous sources, including witnesses, social media reports and Syrian and international medical personnel.The report rejects the Syrian government’s allegations that the attacks were the work of rebels.  It says rockets and artillery shells fired from government-held areas carried the toxic gases to neighborhoods held by rebel forces, and says the rebels do not have those types of heavy arms.The U.S. also says its intelligence indicates that Syrian chemical weapons forces prepared the weapons before the attack.  In the days beforehand, the U.S. “collected streams of intelligence” linked to preparations for an attack.

With Obama’s comments and Kerry’s speech, along with the release of the intelligence summary on the chemical weapons attack, the administration pushed forward its effort to build support at home and abroad for a strike on the Damascus government.

A spokesman for U.S. Senate Minority Leader Mitch McConnell said the White House will brief Republican senators on the Syrian situation in a conference call Saturday, at the request of McConnell.
Many U.S. voters and several members of Congress remain skeptical about the need for any U.S. involvement in Syria.  That sentiment is shared in other parts of the world.Britain’s lower house of parliament has rejected a motion for British participation in a military strike.U.S. ally France, however, remains committed to a “firm and proportionate action” in response to that attack.  Kerry noted that others, such as members of the Arab League, Turkey and Australia, have called for a strong response.

Kerry acknowledged that after more than a decade of war in Afghanistan and Iraq, Americans are tired of conflict.

“But fatigue does not absolve us of our responsibility.  Just longing for peace does not necessarily bring it about.  And history would judge us all extraordinarily harshly if we turned a blind eye to a dictator’s wanton use of weapons of mass destruction against all warnings, against all common understanding of decency.  These things, we do know,” he said.

Former Democratic president Jimmy Carter said a punitive military response would be illegal under international law and “only harden existing positions and postpone a sorely needed political process” in Syria.

United Nations Secretary-General Ban Ki-moon has urged world powers to hold off on possible military action until a U.N. chemical weapons inspection team completes its work in the country.

The inspectors left early Saturday and some are expected to meet with Ban in the next few days.  But, it could be weeks before their final report is issued.  Kerry noted that the U.N. inspectors’ mission was to establish whether chemical weapons were used, but not to determine who used them.