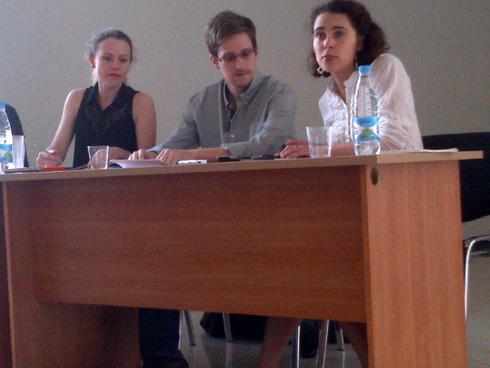 “These nations, including Russia, Venezuela, Bolivia, Nicaragua and Ecuador, have my gratitude and respect for being the first to stand against human rights violations carried out by the powerful rather than the powerless. By refusing to compromise their principles in the face of intimidation, they have earned the respect of the world. It is my intention to travel to each of these countries to extend my personal thanks to their people and leaders.”
Edward Snowden, July 12, 2013, on seeking asylum in Russia.

Oh well, at least standing up for the rights of one very special human.

As the libertarian seeks refuge among the authoritarian, Edward Snowden seeks asylum in Moscow at a harsh time for Russian whistle blowers.

While asylum has not been granted, Russian politicians have tumbled over themselves to welcome Snowden to Vladimir Putin’s Russia. The American’s bid to stay in Russia comes neatly framed by reprisals against two of Russia’s most important internet whistle blowers.

On Thursday, the day before Snowden’s request for asylum here, a Moscow court completed its trial of a dead man, a practice that apparently faded out elsewhere in Europe in the Middle Ages.

In 2008, Sergei Magnitsky, a Russian lawyer for the Hermitage Fund, denounced the theft of $230 million in Russian tax money by a group of government officials. For his pains, he was jailed, denied medical treatment, and according to the Kremlin’s human rights commission, beaten to death by jail guards. Three years after his death, no official in Russia has been tried and convicted for his death or for the theft of the tax money.

But instead of prosecuting the crimes Magnitsky denounced, the Kremlin ordered prosecutors to try the dead man on the same charge – theft of tax money. And so on Thursday in a Moscow district court, judge Igor B. Alisov droned on for an hour and a half reading a guilty verdict to an empty steel cage.

(Edward, if have you downtime in the Moscow airport transit area and want to read up about the Magnitsky case, check out this link. Oops, on second thought, don’t go there. I forgot: the U.S. isn’t the only government in the world that can monitor web browsing histories.)

Looking ahead to next Thursday, a judge is expected to convict Alexei Navalny of embezzlement. Navalny runs an anti-corruption website that routinely draws so many readers that he is called “Russia’s most popular blogger.” He coined and promoted a fatally damaging nickname for Russia’s ruling party: “the party of crooks and thieves.”

In a normal country, Navalny, aged 37, would be running for governor of a large region. In fact, he is a candidate this summer for Mayor of Moscow.

The trial is taking place in Kirov, a regional capital 1,000 kilometers away from his internet readers in Moscow.

On July 5, Navalny summed up his defense with a phrase that applies far beyond the walls of his Kirov courtroom: “Let us get out of the world of fantasy and fairy tales.” 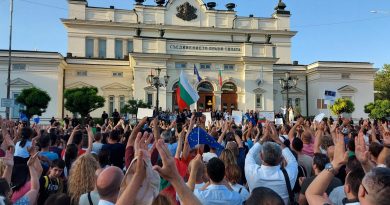 Being there: Amid the crowd as Bulgaria’s government lost the no-confidence vote