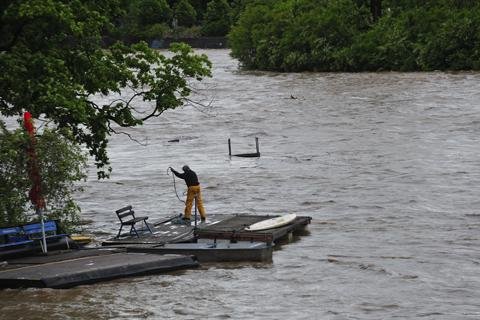 As rainfall ceaselessly pounded the streets of Prague 8-Karlín June 2 and water from the Vltava crept up the neighborhood’s riverbank by critical inches each hour, local resident Jana Lambojová, 64, watched on as panicked vendors carried expensive equipment out of their street-level shops.

“I can smell it,” she said, clutching a shopping bag filled with emergency purchases from a nearby grocery. “It’s that same sweet, fetid stench we had in 2002, and it terrifies me.”

Back then, disastrous floods had left her with nothing but a sack full of random belongings and the eligibility to receive 30,000 Kč  (about 1200 euro). Lambojová, who saw her home in Karlín devastated in 2002, interpreted flood warnings June 2 as the precursor to another calamity.

During two sleepless nights, as the Vltava spilled over its banks throughout the capital, she listened for the ominous bubbling sound from the sewers that inundated her street with floodwater 11 years ago. To her relief, she said, the sound never came.

(As water rushed into the city Sunday afternoon, June 2, many people tried to salvage what they could. The river eventually had a peak flow of 2815 cubic meters per second. Photo: Walter Novak, via The Prague Post.)