Movement for Rights and Freedoms (MRF) leader Lyutvi Mestan has protested “categorically” at an allegation by Boiko Borissov, Bulgaria’s outgoing Prime Minister, that long-time MRF leader Ahmed Dogan commissioned Borissov’s assassination because he had been undermining the interests of an international organised crime group.

Borissov made the allegation in Parliament moments after voting ended the debate on the acceptance of his government’s resignation. An emotional Borissov targeted senior MRF MP Hristo Bisserov, who had said that Borissov had been summoned to be a witness in the trial in Serbia of drug dealer Sreten Josic, and had used his status as Prime Minister not to appear.

“Now he is only Boiko Metodiev Borissov and will have to go,” Bisserov said.

Borissov said that there was an official document based on information from a “partner intelligence agency” that Dogan, founder and leader of the MRF before becoming its honorary life president, had ordered his murder. Borissov challenged Bisserov to read the document and called for a parliamentary inquiry into the allegation.

Dogan was most recently in domestic and international headlines after an incident in which a man pointed a gas pistol at Dogan’s head at the MRF congress in Sofia at which Dogan announced he was stepping down as leader of the party.

Soon after Borissov’s remarks, Bisserov took the microphone in the National Assembly, referring to a file code-named Tulip, said to be on the topic of an organised crime killing some years ago, and allegedly including the phrase: “Boiko took the money”.

Mestan responded in Parliament to respond to Borissov but was indignant when the live broadcast was cut off. Mestan repeated his statement at a hastily-convened news conference, saying that the MRF and Dogan had made possible Bulgaria’s peaceful transition from socialism to democracy.

According to Mestan, Dogan – whose party is led and supported in the main by Bulgarians of Turkish ethnicity – was acknowledged not only in Bulgaria but in Europe as “the architect of the Bulgarian ethnic model”.

Mestan said that GERB did not want a peaceful environment for the elections and wanted to drag the country into an ethnic conflict. The MRF refused to be drawn into a conflict, he said.

In Bulgaria’s ahead-of-term elections, the three major parties will be Borissov’s GERB, the Bulgarian Socialist Party and the MRF. The socialists and the MRF were two out of three elements in the tripartite governing coalition defeated by Borissov in the July 2009 national parliamentary elections. 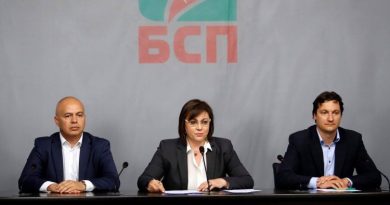