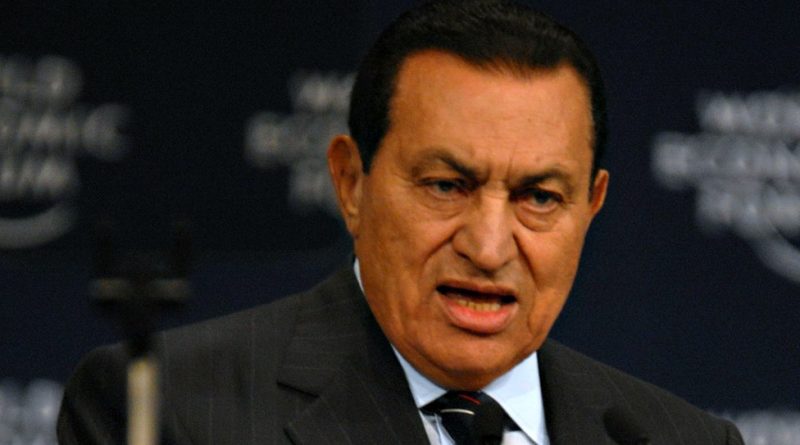 Former Egyptian president Hosni Mubarak, the man long seen as the symbol of stability in the Middle East but who was ousted in a popular uprising, has died after suffering a stroke in prison. He was 84.

Mubarak ruled Egypt for almost 30 years until he was swept from power in an 18-day wave of mass protests in February 2011.

The son of a justice ministry official, he rose through the ranks of the Egyptian Air Force, eventually becoming commander and deputy defense minister.

Mubarak was named President Anwar Sadat’s deputy in 1975 and was at his side when Sadat was assassinated in October 1981 by Islamist militants.

The autocratic leader then assumed the presidency and retained power by positioning himself as a trusted Western ally who honored the 1979 peace treaty with Israel despite fierce opposition throughout most of the Middle East.

At home, he ruled with an iron fist, imposing Egypt’s infamous emergency law, which gave Mubarak and his security forces sweeping powers to crack down on dissent and curb basic freedoms.

The reviled measures – including the use of torture – remained in effect for 31 years, until Egyptian military rulers revoked them last month . Rights activists hailed the law’s expiration as a historic milestone and among the most important dividends of last year’s popular revolt.

When Islamist extremists killed hundreds of Egyptian policemen, soldiers and civilians and dozens of foreign tourists in a violent campaign in the 1990s, Mubarak cracked down.

The authoritarian president had long fought to suppress the Muslim Brotherhood – the Arab world’s largest transnational Islamist movement, which originated in Egypt. In doing so, he also marginalized moderate Islamists, alienating their supporters. Many accused him of corruption.

For three decades, Mubarak presided over an uneasy period of enforced stability and economic development. Every six years, he staged rigged elections to maintain power.

After intense international pressure, Mubarak allowed the formation of opposition parties in 2005, but that year’s vote was marred by heavy irregularities.

In January 2011, mass protests against his government erupted in Cairo and other Egyptian cities. On February 1, the aging leader announced he would not seek re-election in a vote scheduled for September. He also promised constitutional reform.

But Egyptians demanded more radical change in the wake of the Arab Spring movement beginning to sweep the region. On February 11, Vice President Omar Suleiman announced Mubarak was stepping down and the military’s supreme council would run the country. The defiant leader and his family fled to their Red Sea resort home.

Mubarak was later arrested and tried over the deaths of anti-government protesters. On June 2, he was found guilty of complicity for failing to prevent the killing of hundreds who had revolted against him. He was sentenced to life in prison along with his former interior minister, Habib Al-Adly.

Corruption charges against Mubarak and his two sons, Gamal and Alaa, were dropped.

Mubarak’s health had deteriorated sharply since his sentencing and officials said he resisted for hours leaving the helicopter that had flown him to Cario’s Tora prison.