The head of Bulgaria’s special logistics centre for distributing personal protective equipment (PPE) against Covid-19, Commissioner Nikolai Nikolov, detailed at an April 7 briefing the distribution of PPE so far.

The logistics centre was set up on the orders of Prime Minister Boiko Borissov on March 17 and Nikolov, the head of the chief directorate for fire safety and civil defence, was appointed as its head.

A total of 53 975 protective masks had been issued to doctors on the front line against the virus and 946 950 for general use, not counting the 500 000 made available by the Customs Agency.

At a logistical co-ordination centre meeting on April 7, numerous items were to be allocated.

These included a million pairs of gloves, of which 10 000 would be consigned to a reserve. Also allocated 6500 items of protective clothing, of which 1500 would go into the reserve, 19 000 protective masks, 2000 of them in reserve, and 4000 protective helmets.

Nikolov said that 4505 further special protective masks were available for distribution, as were 354 700 general-use protective masks, 279 000 pairs of gloves and 949 reusable protective clothing for specialist personnel.

He said that most pharmacies in Bulgaria had masks and disinfectants in stock, and more than 60 companies had put forward offers regarding organising mask production. These offers were on the website of the logistics centre, Nikolov said.

Five other companies’ designs had successfully passed tests in a Defence Ministry laboratory and production was going to get underway, while another company already had a request from Germany to buy all its production, Nikolov said.

Deputy Prime Minister Tomislav Donchev told the briefing: “Please do not confuse the distribution of martenitsas (woolen talismans that Bulgarians wear in April for good health) with the complex logistical task of supplying hospitals with protective equipment. If there are restrictions here, they are not monetary but related to the lack of some items on the world markets.

It is significant enough that some countries were already relying on Bulgaria’s production, Donchev said.

Referring to the latest attack on the government by President Roumen Radev, delivered during a World Health Day visit to Pirogov emergency hospital, Donchev said that while the crisis was bringing out the best in the public, unfortunately this was not the case with politicians. 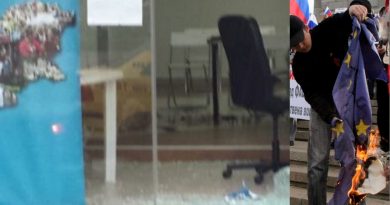