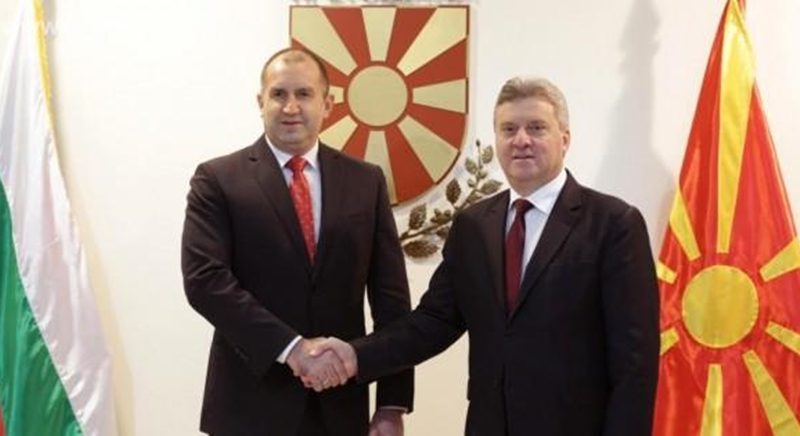 For Bulgaria, it is important that a future name for the Republic of Macedonia does not include a geographical identifier that could be interpreted as a claim on Bulgarian territory, President Roumen Radev said during a visit to Skopje on February 16.

Radev became the first Bulgarian head of state to visit the Macedonia capital, and by extension, this was also the first visit by a Bulgarian president since the good-neighbourliness treaty between the two countries came into force in recent days.

Radev said that Bulgaria wished for “open, honest and intense talks” between Greece and Macedonia.

Under UN auspices, talks on the name dispute between Athens and Skopje have been revitalised recently.

Macedonia’s prime minister Zoran Zaev said recently that there were four possible names being discussed. He did not disclose them, but several media reports have said that a possible future name would include a geographical qualifier.

Bulgaria has recognised the Republic of Macedonia under that country’s constitutional name since 1991.

However, relations between Sofia and Skopje were vexed for years over issues of identity, language and history, though a positive turning point was reached with the 2017 agreement on the good-neighbourliness agreement.

Along with his host Gjorge Ivanov, Radev was full of praise for the agreement, saying that it had “swept away” the mistrust, reservations and concerns in the relationship between the two countries.

At the meeting of the two presidents, it was agreed that a Strategic Partnership Treaty should be signed as a continuation of the Neighborhood Treaty between the two countries to regulate the mutual support of both sides in the field of security and defence, the Bulgarian President’s office said.

“The Bulgarian Presidency of the Council of the European Union gives an historic opportunity to all countries in the region for European and Euro-Atlantic integration. Bulgaria has always been one of the strongest advocates for the European perspective of the Republic of Macedonia. You can always rely on Bulgarian support and expertise in all areas,” Radev said, adding that Macedonia had more work to do on its way to EU membership.