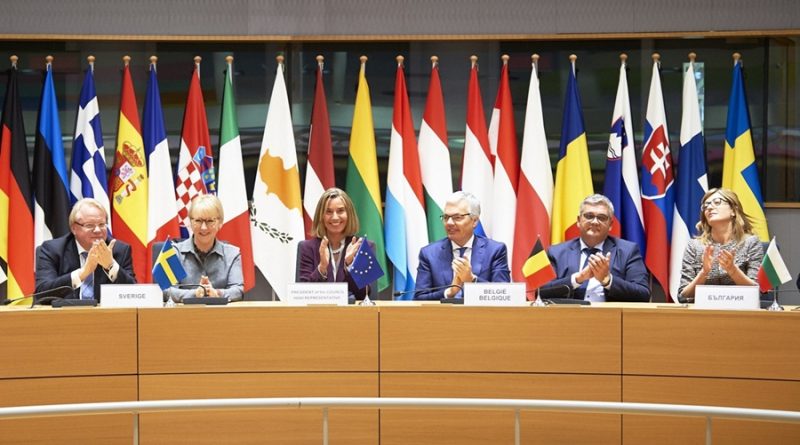 Twenty-three member states of the European Union have signed a historic deal to co-operate more closely on defence. The pact, known as Permanent Structured co-operation or Pesco, legally binds its signatories into joint defence projects as well as pledging to increase defence spending and contribute to rapid deployments.

The pact includes all EU governments except Britain, which is due to leave the bloc in 2019, Denmark, Ireland, Portugal and Malta.

It is backed by a $5.8 billion fund for buying weapons, plus extra cash for operations and money from the EU budget for defence research. Leaders hailed the agreement as a historic milestone for the EU.

“I have to say that I was looking at you all signing something that just one year ago most of us and most of the rest of the world considered impossible to achieve. So I am receiving this notification with a lot of satisfaction, but also a lot of sense of responsibility. This is the beginning of our common work,” said the EU Foreign Affairs Policy Chief Federica Mogherini at a signing ceremony Monday in Brussels.

Supporters say the pact will end the kind of shortcomings seen in the 2011 intervention in Libya, when European allies relied on the United States for air power and munitions.

“It has failed in the past. There is a window of opportunity now that they have seized on, led by predominantly Germany and France, to build this group of 23 who want to integrate more closely,” says Sophia Besch, security and defence analyst at the London-based Centre for European Reform.

That window of opportunity has opened thanks to political forces further afield, foremost among them the election of Donald Trump as US President in 2016. On the campaign trail, he called Nato “obsolete” and demanded allies do more for their own defence. Though he has since offered support for the alliance, doubts linger in Brussels.

“The strong sense in Europe that America will no longer be there to rescue them, and that they have to get serious, that they have to grow up on defence themselves. Then secondly, we’ve had Brexit. The U.K. has always been critical of European defence integration on the EU level,” says Besch.

Britain is due to leave the EU in 2019. Its foreign secretary, Boris Johnson, pledged to support the EU pact Monday, telling reporters, “We think there’s a lot of promise in the ideas, and we’ll be backing them up.”

The Pesco pact aims to increase European security co-operation below the level of collective defence, which is covered by Article 5 of Nato, according to analyst Besch.

Analysts say Britain fears being squeezed out between Nato and the European Union. Brussels has indicated Britain may be able to join EU projects under Pesco, but only if it provides substantial funds and expertise.

Thousands of migrants stranded between Serbia and Croatia