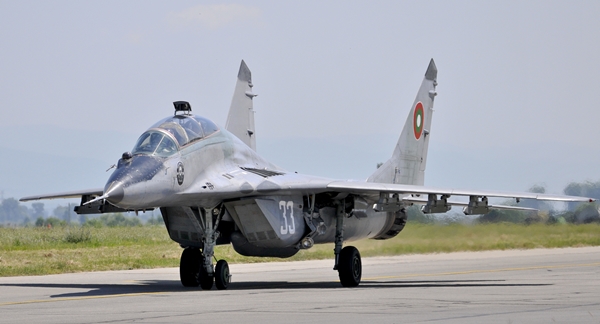 The Bulgarian Defence Ministry has accepted only two of 10 new and overhauled MiG-29 fighter jet engines because of insufficient information about the equipment used, deputy defence minister Anatoly Velichkov said.

A 22 million euro contract provides for the delivery of four new and six overhauled engines with Bulgarian company Aviostart, which – as Mediapool reported – is only an intermediary because the equipment has to be provided by Russian manufacturer RSK MiG.

Velichkov said that all 10 engines had been delivered, but only two accepted, because of shortcomings in documentation. The main problem is that the manufacturer’s original forms are missing, so it is not clear when the overhauled engines were produced, how long they have been in use, and – most importantly – what their expected lifespan is.

However, Defence Minister Krassimir Karakachanov said that he believes that there will be no problem with the equipment supplied and that the case will be cleared up.

In recent days, Karakachanov has indicated that he wants to widen the business of overhauling the Bulgarian Air Force’s ageing Soviet-made aircraft beyond the MiGs to other planes such as the Su-25s.

The issue of the repair of the old MiG-29 engines has been a complex one. At the time of the second Borissov government, the business of overhauling the engines was transferred from Russia to a new contract with Poland. This annoyed the Kremlin, which said that Poland lacked the licences to carry out the business.

In 2016, the business was transferred back to Russia. Meanwhile, the defence minister of the time, Nikolai Nenchev – a member of the Reformist Bloc junior partner in the then-government – is on trial in connection with the handling of the MiG overhaul contract. Nenchev denies wrongdoing.

The MiG engine overhaul process is important to Bulgaria, as it endeavours to keep its air policing capacity operational.

A succession of Bulgarian governments have, over more than a decade, failed to conclude any deal to get new fighter jets. Earlier in 2017, it appeared progress was being made towards negotiations with Sweden over acquiring new Gripen fighters, but this was scuppered among political manoeuvring.

In 2016, Bulgaria received three bids – from Sweden for made-to-order new Gripens, from Portugal came an offer of second-hand US-made F-16s and from Italy, of second-hand Eurofighters. Amid the restart of the fighter jet acquisition process, Prime Minister Boiko Borissov’s GERB party appears to be positioning itself towards Bulgaria acquiring F-16s.

On October 18, Defence Minister Karakachanov – who is from the coalition government minority partner United Patriots – said in a television interview that Bulgaria should not compromise on the purchase of new fighters.

Karakachanov said that he would propose that the three bidders should put forward offers for a new aircraft, not just second-hand ones (which in 2016, only Sweden’s Saab had done).

Bulgaria has projected spending 1.5 billion leva on the fighter jet acquisition process. The interdepartmental expert committee report examined by the Gerdzhikov caretaker cabinet in early 2017 ranked the Gripen offer as the best on financial and technical grounds.

However, a special parliamentary committee appointed at the initiative of GERB said that it had found shortcomings in the process that led up to the presentation of this report to the caretaker cabinet. The National Assembly voted to approve this report, voting to recommend that the Defence Ministry goes back to the point of calling for the bidders to present offers again.

Bulgaria’s military modernisation process involves not only the acquisition of jet fighters that would meet the standards of the Nato alliance of which the country has been a member since 2004, but also naval patrol vessels, and armoured vehicle for the infantry.

Bulgaria to move Ukrainian refugees from hotels to state facilities