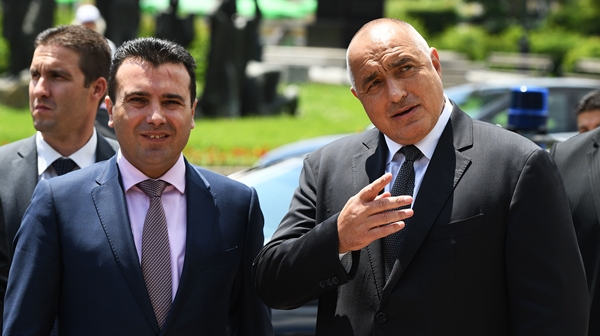 This is according to statements by the government media services in Sofia and Skopje.

Plans are for the agreement to be signed in Macedonia on August 2, Ilinden, when the country celebrates the anniversary of a key event on its path of statehood. Bulgarian Prime Minister Boiko Borissov intends travelling to Macedonia for the signing. The government in Skopje has mandated prime minister Zoran Zaev to sign the agreement.

Borissov said at the Bulgarian cabinet meeting that the signing of the treaty was an expression of Bulgaria’s desire to build modern good neighbourly relations based on European values.

Borissov said that for several years, several Bulgarian governments from the whole political spectrum had been engaged in the negotiations, defending the Bulgarian national interest.

According to Borissov, the visit to Sofia by Zaev to Sofia and the position expressed on the two countries’ shared history was a first step in the quest for building a new spirit in the relations between the neighbours.

“The European Union assessed the treaty as a first step and a new beginning for developing the European perspective of the Republic of Macedonia,” Borissov said.

Borissov said that the signing of the treaty will open a new page in the relations between the two countries and establish relations of hearty friendships.

At the July 26 cabinet meeting, Transport Minister Ivailo Moskovski presented a document, which will enable specific steps to be taken to complete the railway link between Bulgaria and Macedonia, the government media office said.

The Bulgarian cabinet approved the Memorandum of Understanding between the Ministry of Transport, Information Technology and Communications of the Republic of Bulgaria and the Ministry of Transport and Communications of the Republic of Macedonia on the development of the railway links between Sofia and Skopje.

Bulgaria is committed to the completion of the railway connection in the direction Sofia – Pernik – Radomir – Macedonian border by 2027.

Macedonia, on the other hand, committed itself to build the railway line from Kriva palanka to the Bulgarian border by the end of 2025.

Bulgaria’s cabinet also decided that Bulgaria and Macedonia will cooperate in the field of natural gas.

In line with their state energy policies and the common energy policy of the EU and the Energy Community, Bulgaria and Macedonia will cooperate to explore the opportunities for developing a new direct link between the gas systems of both countries.

To implement the objectives of the memorandum, a joint gas working group will be set up, which will prepare a feasibility study for the construction of the gas connection within six months of the entry into force of the document.

It must present an analysis of the technical, market, economic, financial and regulatory aspects of the project and identify solutions for the necessary infrastructure on the territory of the two countries. Based on the results of these studies, further decisions will be taken to build a new gas link between the two countries.