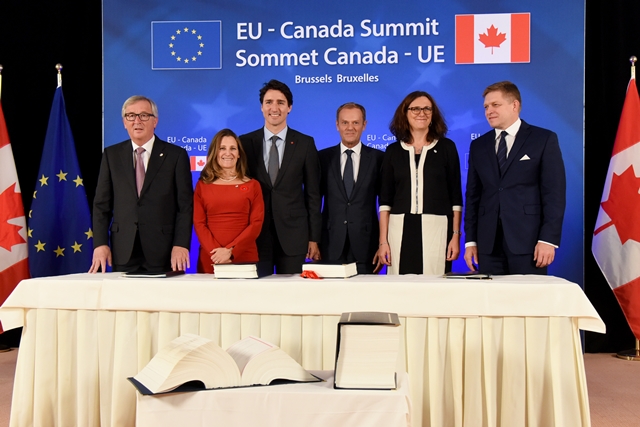 The signing ceremony had been pushed back from Thursday after French-speaking Wallonia, with just 3.6 million people, initially vetoed an agreement affecting more than 500 million Europeans and 35 million Canadians.

The EU requires unanimity among its 28 members and Belgium needed the backing of all its regions to approve the agreement.

The start of Sunday’s summit was also delayed when Trudeau’s plane was briefly forced to return to Canada due to mechanical problems.

CETA will remove 99 percent of customs duties between Canada and the 28-member European bloc, linking the single EU market with the world’s 10th largest economy.

CETA is expected to boost EU trade with Canada by $13.2 billion (12 billion euros) a year, creating economic growth and jobs on both sides of the Atlantic.

The EU insists that the deal will not prevent governments from taking measures to protect environmental and social standards if they believe action is needed, despite concerns in Wallonia and elsewhere that big companies would have free rein.

The EU-Canada deal has drawn widespread protests from anti-globalization “Stop CETA” activists who have said it would undermine local industries and standards for healthcare and other issues.

Sunday a small number of protesters gathered outside the European Council building banging drums and shouting anti-CETA slogans. Some demonstrators broke through police lines and put red paint on the glass doors of the building. Police took away about dozen people, but did not break up the protest.

EU unemployment flat at 11% in September

LOT Dreamliners to return to operation in June