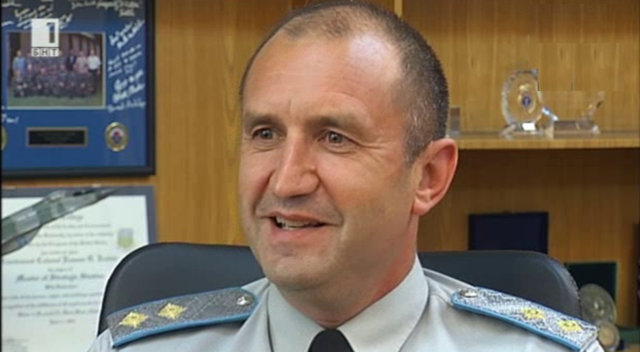 Bulgaria’s Cabinet has recommended to head of state President Rossen Plevneliev to approve the resignation of Air Force chief General Roumen Radev, who has been tipped as a possible presidential candidate on the ticket of the opposition Bulgarian Socialist Party (BSP).

Plevneliev, constitutionally the Commander-in-Chief of Bulgaria’s armed forces, was expected to formally approve Radev’s resignation in the hours following the August 10 Cabinet meeting.

At the Cabinet meeting, Prime Minister Boiko Borissov – himself the subject of speculation that he will be his centre-right GERB party’s candidate in Bulgaria’s November 6 presidential elections – said that he had heard “reproaches” that the Cabinet should have held a special meeting to vote on Radev’s resignation. There was no sense in that, Borissov said.

While the media were present in the Cabinet room, Borissov ordered the Radev resignation agenda item brought forward for swift approval.

Borissov instructed Defence Minister Nikolai Nenchev to ensure that Radev’s resignation papers were processed as fast as possible and reached the President’s desk that day.

Radev is among the possible candidates seen as most likely to be adopted by the BSP as its presidential candidate. Another is Ombudsman Maya Manolova, formerly a BSP MP who was deputy speaker of the National Assembly at the time of the highly unpopular and now-departed 2013/14 administration.

The BSP issued a statement on August 9 noting that by Bulgarian law, both Radev and Manolova would have to resign their positions before they could be formally nominated as presidential candidates.

The BSP was to have announced its presidential candidate on August 14, following a meeting of the party’s national council, but this has been postponed because the party is continuing to hold talks on a possible joint candidacy with splinter socialist minority party ABC. Radev is seen as close to ABC leader Georgi Purvanov.

On Bulgaria’s left wing, there was a setback for aspirations for a joint candidate across a wide front, as extra-parliamentary party Movement 21, led by former BSP MP Tatyana Doncheva, quit the negotiations with the BSP.

Borissov’s GERB, the country’s most popular political party going by all recent opinion polls, is to announce its candidate in September, Borissov and other senior GERB figures have said.