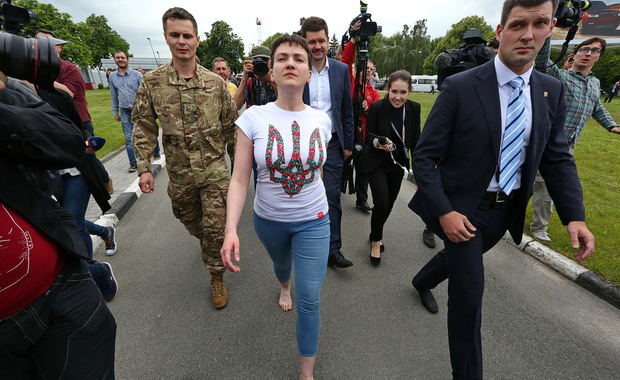 Just two days after being released from a Russian prison, pilot Nadiya Savchenko is capitalizing on her symbolic importance to Ukrainians, saying Friday that she would run for president “if Ukrainians want me to.”

Savchenko, Ukraine’s first female pilot, was elected to the country’s parliament and appointed to the Parliamentary Assembly of the Council of Europe during her nearly two years in captivity, fueling speculation that she might have political ambitions.

“I don’t think Savchenko would use her immense credibility to fight over party leadership,” said Balazs Jarabik, a visiting scholar at the Carnegie Endowment for International Peace in Washington, in e-mailed replies to VOA.  “Based on her press conference, she would target the country leadership instead.”

Yet the main question involves Savchenko’s relations with Yulia Tymoshenko, Ukraine’s former prime minister and leader of the Fatherland party.

Tymoshenko was a strong advocate for Savchenko’s release, knowing that her return to Ukraine would strengthen Fatherland’s position. However, there are reasons to believe this political marriage will not last.

Both Tymoshenko and Savchenko are known for their strong personalities. Both are outspoken and popular with the public. Tymoshenko was a symbol of political persecution under former President Viktor Yanukovych, while Savchenko is a symbol of Ukrainian resistance against the Kremlin.

The first sign of tensions emerged Wednesday when Savchenko arrived at the airport in Ukraine after her release: The military heroine declined to accept a bouquet of flowers from Tymoshenko.

“It was a completely pragmatic alliance without mutual love,” said Alexander Baunov of the Carnegie Moscow Center.

Savchenko received a hero’s welcome when she returned to Ukraine on Wednesday, which was also the second anniversary of Ukrainian President Petro Poroshenko’s first-round presidential election victory.

Savchenko’s return could translate into a victory for the embattled president, who pledged to secure the return Crimea and eastern Ukraine “just as we brought back Nadiya.”

But, since he was elected after a 2014 popular uprising that ousted Moscow-backed Yanukovych, little progress has been made in the two-year struggle to end a Russia-backed insurgency in the east.

Analysts see Savchenko as an idealist, which they say could stymie her success in making the kind of hard compromises demanded by politics. But, it could also make her a threat to those in power, including Poroshenko.

Poroshenko has been named in the so-called Panama Papers, which include documents suggesting he set up an offshore firm to avoid paying taxes in August 2014, during a peak in fighting in eastern Ukraine.

“I think that at some point, she will see any compromise, any deal, as a national treachery,” said Baunov. “And Poroshenko is a real, acting president, not just a possible future one. So, of course, he has to make some concessions and some compromises. So, probably, I predict she will criticize him very soon.”

Still, even as she enters the political arena as a public-supported heavyweight, it is too early to tell what impact Savchenko will have on Ukrainian politics, said Jarabik.

“Ukraine has co-opted into politics some of the Maidan [protest] heroes, including fighters, and none of them proved to be solid public politicians,” he said. ” ‘Here I am, ready to die for Ukraine’ does not equal a viable political program.”

Savchenko, whose first name Nadiya means “hope” in Ukrainian, said Friday that she had no idea what her next step might be. She said she could possibly help out with the peace negotiations in Minsk, Belarus, although she has no experience in such matters and is not known for being diplomatic.

At one point during her trial, Savchenko flipped her middle finger and shouted profanities at the procedures, which were widely condemned as a Kremlin-orchestrated political show.

But in the often shady world of Ukrainian politics, the heroes and villains are not as easy to distinguish.

”So, it’s very difficult to keep the reputation of a hero, of a person around which we have a kind of national consensus, when practicing real Ukrainian politics,” Baunov said. 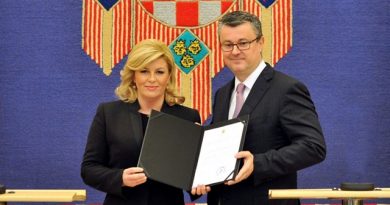