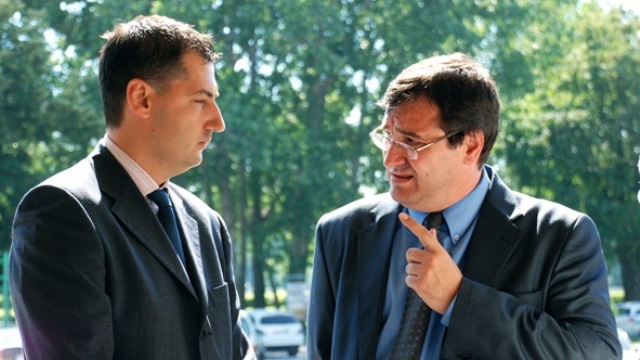 In the days remaining to the run-off between GERB’s Ivan Totev and the Patriotic Front’s Slavcho Atanassov in the mayoral elections in Plovdiv, parties and coalitions that did not make it to the finals are declaring their allegiances – in the case of the Reformist Bloc, initially not necessarily the same one.

Totev and Atanassov are heading to the run-off vote in Bulgaria’s second city after, in the October 25 first round, incumbent mayor Totev got 39.55 per cent of the vote and his predecessor as mayor, Atanassov, got 21.12 per cent.

Dani Kanazireva’s Union for Plovdiv has declared for a right-wing government of the city. The message seemed more directly aimed at the formation of a governing coalition in the council; after all, at the second round, the choice is between two candidates, one right-wing and the other more right-wing. In the first round of the mayoral race, Kanazireva ran third, with 13.95 per cent.

Kanazireva told a news conference that her team’s clear position was to support the European future of the city and to form a right-wing majority in the next city council. In the city council elections in Plovdiv, GERB got 31.76 per cent, Atanassov’s coalition 14.69 per cent and the Union for Plovdiv 11.16 per cent.

It turns out that Boiko Borissov, Prime Minister and GERB party leader, was the only national political figure to congratulate Kanazireva. According to a report by Plovdiv website podtepeto.com, she did “she did not hide that she was pleasantly surprised by the reaction of the Prime Minister”.

Kanazireva told the news conference, “in spite of the existing problems in the government, the administration of GERB and the Reformist Bloc with Mr Borissov as Prime Minister is a better solution for Bulgaria than the government of the Bulgarian Socialist Party, Movement for Rights and Freedoms and Ataka with Mr Oresharski as Prime Minister”.

She said that her team had not met with any other candidate for mayor and had not negotiated with any of them. “My only meeting after the elections was with Prime Minister Boiko Borissov.”

Meanwhile, the Agrarian National Union got some notice in the local press by declaring for Totev at the second round, a fact notable largely not for the political weight that this may or likely may not represent, but because the party did not actually field a candidate in the first round.

As to political weight or lack thereof, nothing much has been heard so far from Georgi Gergov, the Bulgarian Socialist Party’s candidate for mayor, who on October 25 placed fifth out of 16 candidates with 7.19 per cent. Plovdiv media that appeared to lack fondness for Gergov pointed out, not without a certain relish, that this was the worst performance of a BSP mayoral candidate in Plovdiv in 25 years.

No one really seemed to be seeking the opinion or allegiance of those of the 16 candidates who came stone bottom or close to it – Hristo Alexiev (New Alternative, 0.26 per cent) and Angel Chakurov (Movement for Social Humanism, 0.33 per cent). Perhaps people in Plovdiv are not that fond of new alternatives or social humanism, or perhaps simply not that fond of Alexiev and Chakurov.

Arguably more significantly, by the afternoon of October 28, nothing on the topic of a second-round endorsement had been heard from Zdravko Dimitrov, who on October 25 ran fourth in the Plovdiv mayoral elections with 10.76 per cent. In July, Dimitrov, an MP, was thrown out of GERB’s parliamentary group for confirming that he intended standing against Totev, the official candidate of Borissov’s party. Dimitrov then emerged as the candidate of the Reformist Bloc, GERB’s minority partner in the national coalition government.

The Reformist Bloc seemed to be in an interesting position, or two, by mid-week before the run-off.

The bloc is made up at national level of five parties. On Tuesday, one of those parties had endorsed Atanassov. On Wednesday, another of the parties endorsed Totev, and claimed to be speaking for the bloc as a whole. What anyone, not excluding Reformist Bloc voters, may make of this remains to be seen.

On October 27, a national news conference by Meglena Kouneva’s Bulgarian for Citizens Movement, a Reformist Bloc constituent party, endorsed Atanassov, and indicated that it would speak to the rest of the bloc to do the same.

The following day, Dimitar Shishkov, an MP from Plovdiv for the Reformist Bloc and local leader of Kouneva’s party, told Radio Plovdiv that the party supported Atanassov because he was “reasonable”, unlike Totev, “who manages the city in a feudal manner”.

Totev had showed unwillingness to communicate with other political forces, Shishkov said. “Just a month ago, he said he would take us all at the first round,” he said, going on to add his complaints about Plovdiv’s municipal taxes being higher than in Sofia, the lack of public transport, the higher kindergarten fees and “the tax you pay for your car in Sofia is about 700 leva lower than in Plovdiv”.

However, Bozhidar Lukarski, leader of the Union of Democratic Forces – a constituent party of the Reformist Bloc – and Economy Minister in the Borissov Cabinet – said that the Reformist Bloc was backing Totev’s mayoral candidacy at the second round.

It was normal, not only as part of the ruling coalition, but also because GERB had the values closest to that of the bloc, to support its candidate, Lukarski said.

Clarity is awaited. There are, after all, still three parties in the Reformist Bloc left, to express their position individually or collectively. Totev and Atanassov, and perhaps some Plovdiv voters, might be curious about the matter.

Update! On the afternoon of October 28, Kouneva said that the Reformist Bloc backed Totev, and was “united” on the issue. Asked about the comments by Shishkov, she said, “that was an old position”.

She went on to wish a happy birthday to Ivan Totev.