All eyes in debt-ravaged Greece and beyond are riveted on a European Union summit set to convene Tuesday in a showdown likely to determine whether Greek banks open later this week or remain shut.

Pressure mounted Monday on Athens, as one of its key lenders, the European Central Bank, decided not to boost emergency credit to Greek banks. Without outside help, those banks are expected to run out of cash as early as Wednesday, with Athens projected to default on billions of dollars in loan repayments to European creditors later this month.

German Chancellor Angela Merkel, speaking Monday in Paris alongside French President Francois Hollande, said the conditions for a new Greek bail-out package “have not been met.” She placed the onus on Greek leaders to act quickly to strike a deal with creditors in order to stay in the eurozone.

“Time is of the essence and we insist that Greek proposals must be on the table this week, so we can deal with the situation the way it is at the moment,” Merkel said.

Greek voters on Sunday overwhelmingly rejected a new round of austerity measures demanded by European creditors in return for further installments on more than $250 billion in loan guarantees since 2010.

Without a deal, analysts say the crisis could force Greece from the 19-nation euro currency bloc — the first such departure in the eurozone’s 16-year history.

Earlier Monday, in a sign seen by some analysts as conciliatory, outspoken Greek Finance Minister Yanis Varoufakis resigned, after repeated clashes with international lenders over bailout terms. Most recently, he accused the EU leaders of “terrorism” in their push to persuade Greek voters to approve more austerity measures.

In explaining his departure, Varoufakis said he was “made aware of a certain preference” by some members of the eurozone for his “absence” from meetings of finance ministers. He also said it was “an idea the prime minister judged to be potentially helpful to him in reaching an agreement” with Greece’s creditors.

In Washington, White House spokesman Josh Earnest said it is in “the collective interests” of Europe and the United States that Greece reaches a new bailout deal with its lenders, with Athens agreeing to “a package of reforms.”

U.S. Treasury Secretary Jack Lew spoke Monday with Tsipras and Tsakalotos. He expressed hope all sides will be able to agree on a deal that “will allow Greece to make difficult but necessary fiscal and structural reforms, return to growth, and achieve debt sustainability within the eurozone,” according to a Treasury statement.

U.S. stock prices moved down, but the declines were not as large as some analysts predicted. Most markets around the world, including those in Europe, fell because of the financial uncertainty created by Sunday’s Greek vote.

The chief of the eurozone’s finance ministers, Dutch Finance Minister Jeroen Dijsselbloem, said keeping Greece in the eurozone “is still their objective and mine,” but he said the referendum “doesn’t bring us closer to a solution right away.

A leading German economist predicted a likely Greek exit from the eurozone. “I have very little hope that [it] can be avoided,” said Henrik Enderlein. He said there is an 80 percent probability it will happen. “This situation is extremely dangerous for the euro area.” 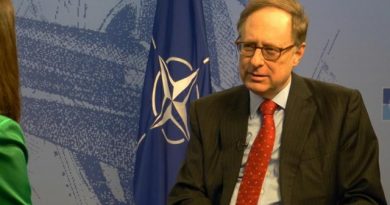 Nato’s Vershbow on alliance troops in Eastern Europe: ‘We had no choice’