Most of the people granted protection by Bulgaria in 2014 were Syrians, according to figures released on May 12 by EU statistics office Eurostat.

Positive decisions by Bulgaria on asylum applications added up to 7020 in 2014. Eurostat said that 5170 people were given refugee status and 1855 what is termed subsidiary protection, while the number of applications granted for humanitarian reasons – which unlike the first two categories is governed by national legislation – was zero.

Eurostat said that the 27 EU countries for which data were available (the exception being Austria) granted protection status to 185 000 asylum seekers in 2014, an increase of close to 50 per cent compared with 2013.

Since 2008, more than 750 000 asylum seekers have been granted protection status in the EU.

The largest group of beneficiaries of protection status in the EU in 2014 remained citizens of Syria (68 400 persons or 37 per cent of the total number of persons granted protection status in the 27 EU member States for which data are available), followed at a distance by citizens of Eritrea (14 600 or eight per cent) and those of Afghanistan (14 100 or eight per cent). 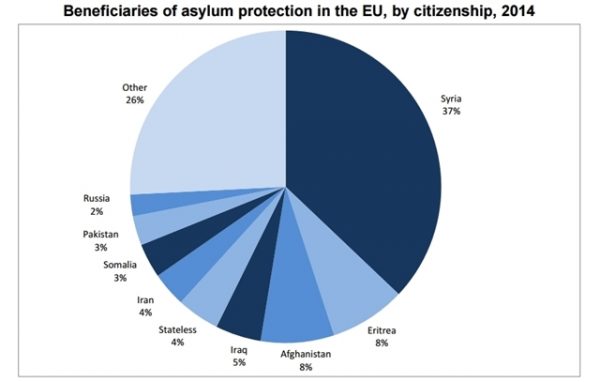 Of the 14 600 Eritreans granted protection, more than three-quarters were registered in three EU member states: Sweden (5300), the Netherlands (3600) and the United Kingdom (2300).

Out of the 185 000 persons who were granted protection status in 2014 in the 27 EU member states for which data are available, 104 000 persons were granted refugee status (56 per cent of all positive decisions), 61 000 subsidiary protection (33 per cent) and 20 000 authorisation to stay for humanitarian reasons (11 per cent). In addition, the EU Member States received almost 6 500 resettled refugees .

The rate of recognition of asylum applicants, i.e. the share of positive decisions in the total number of decisions, was 45 per cent for first instance decisions.