Bulgarian prosecutors have begun investigating an allegation by Defence Minister Nikolai Nenchev that he was offered a bribe and received death threats in bids to induce him to extend a multi-million dollar with a Russian firm to maintain MiG military aircraft.

Nenchev was quoted as saying in an interview with Bulgarian-language daily Sega on April 24 that the contract, which expires in September 2015, would probably not be renewed.

A Nato member since 2004, Bulgaria has only a small and ageing fleet of Soviet-made jet fighters and has been meant to upgrade to Western-made multi-purpose fighters to meet Nato interoperability requirements.

Through a succession of governments in the past decade, this jet fighter acquisition process has got nowhere and the current centre-right government has signalled that it is not immediately willing to spend money on new (or second-hand) fighters. Recently, Nenchev indicated that the country was considering the option of getting second-hand jet fighters free-of-charge from the United States.

Nenchev was quoted as telling Sega that he had met people, unnamed in the article, who had offered him a “significant percentage” if he would sign an extension to the contract, the existing version of which is worth 80 million leva (about 40.9 million euro).

He said that death threats also had been made against him.

Prosecutors noted that Nenchev had not, as the law requires, notified authorities of the alleged attempt to bribe him.

The allegations will be investigated by the specialist unit for investigating corruption. Nenchev will be interviewed and assessment made about the need to collect further information, including in regard to the offers on the maintenance of aviation equipment for the air force.

The alleged death threats also will be investigated, the prosecution said. 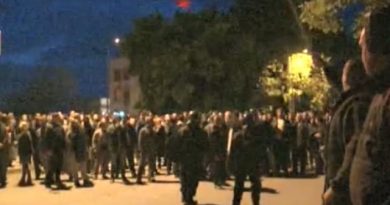