Bulgaria’s Cabinet has asked US nuclear firm Westinghouse Electric to join the proposed expansion of the Kozloduy nuclear power plant as a strategic investor and shareholder with a 49 per cent stake, Energy Minister Temenouzhka Petkova said on March 26.

Speaking on the sidelines of a conference on nuclear energy, Petkova said that the government has also asked Westinghouse to raise “project financing corresponding to their stake” and then stay on as a shareholder for as long as possible.

Last year, the now-departed Plamen Oresharski administration signed a shareholder agreement with Westinghouse to build a new 1000MW reactor at Kozloduy, with an estimated cost of $5.3 billion. The deal was agreed by the cabinet just days before it left office, which irked the socialists who were backing the government, but must still be approved by the current government.

That deadline expires on March 31, Petkova said, with negotiations between the government and Westinghouse expected to go to the wire.

The shareholder agreement envisions the Kozloduy power plant, which is fully state-owned, holding a 40 per cent stake in the company that would build the new reactor, with Westinghouse taking the rest. The US firm would provide all of the plant equipment, design, engineering and fuel.

The agreement contained no financial commitments for the Bulgarian state, since, at the point it was signed, work on the financial framework and the engineering agreements had not started yet.

Petkova said that the Cabinet was keen on the project requiring no government guarantees, thus having no impact on Bulgaria’s debt or budget deficit. Asked how the government planned to raise its 51 per cent share of financing – provided Westinghouse agreed to raise the remainder – Petkova said that it was too early to discuss the issue before the negotiations with Westinghouse were concluded. 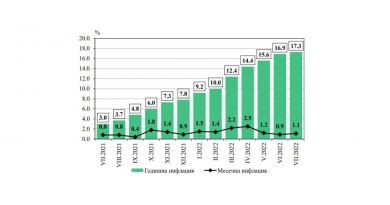 Bulgaria annual inflation reaches another 24-year high at 17.3% in July