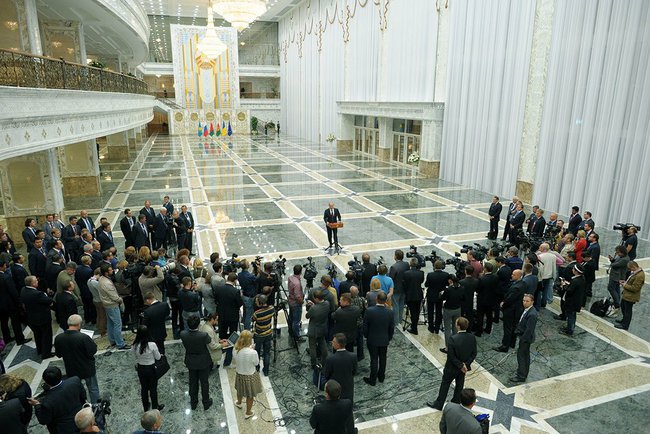 Both Russian President Vladimir Putin and Ukrainian President Petro Poroshenko claimed that progress has been made regarding the crisis on eastern Ukraine. In statements issued after the conclusion of an August 26 meeting in Minsk, Belarus, among leaders of Ukraine; the “Eurasian trio” of Russia, Belarus and Kazakhstan; and the European Union.

Presidents Poroshenko and Putin also met one-on-one for several hours at a meeting that included dinner.

“We discussed the need to end bloodshed as quickly as possible; the need to transition to a political settlement of the problems, the whole range of problems that Ukraine is facing in its southeast region,” Putin said at a pres conference.

“Both President Poroshenko and I feel that we need to renew our dialogue on energy, including the gas issue. Frankly, this is a difficult issue, it is in a deadlock, but we still need to talk about it. We agreed that we will renew those consultations. That’s the short version,” he said.

Poroshenko confirmed that there will be further dialogue. “We agreed that we will hold consultations through a trilateral contact group to speed up the transition to the bilateral ceasefire regime, control of which will be carried out by the representatives of the OSCE monitoring mission,” he said.