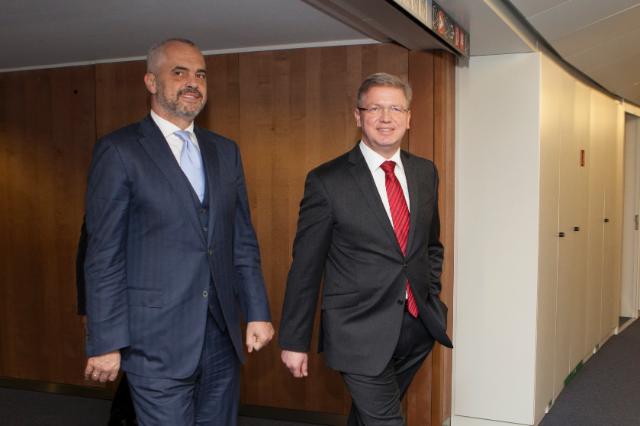 At a General Affairs Council meeting on June 14 in Luxembourg, EU ministers agreed – based on the recommendation by the European Commission – to grant EU candidate status to Albania, subject to endorsement by EU heads of states at the European Council on June 27 in Brussels.

European Commissioner Štefan Füle welcomed the decision, saying, “Today is a good day for enlargement and a great day for Albania’s EU integration. Albania is one step closer to the European Union, another important milestone on EU path has been reached”.

Granting of candidate status was a logical consequence of Albania’s reform efforts, he said.

“Our report from the beginning of this month and today’s decision of the Ministers is acknowledgement of the EU for the efforts made and the progress achieved on Albania’s accession road.”

At the same time it should be seen as an encouragement to continue with existing reforms and embarking on new reforms necessary to prepare Albania for the start of the accession negotiations later on, Füle said.

He said that over recent months, Albania had shown concrete action and continued political will to pursue the process of EU-related reforms.

The Albanian government has continued to implement and consolidate reform measures in judicial reform, in the fight against corruption and organized crime. The most recent example is the major police operation in Lazarat last week to destroy the cannabis cultivations in the area, Füle said.

“For Albania to further advance on its EU-integration path, major challenges still lie ahead,” he said.

Albania would need to continue and consolidate its systematic approach to reforms, address existing shortcomings and tackle remaining EU-related challenges.

Füle said that the granting of candidate status to Albania is a clear testimony that the enlargement process is “credible and dynamic”, and that the EU sticks to its promises and commitments once the partners deliver on their reform homework.