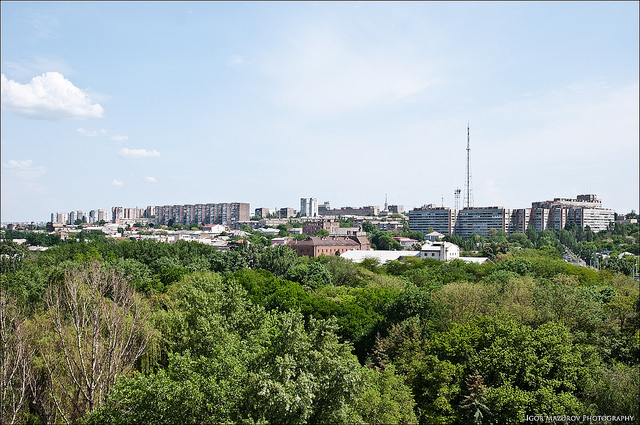 Ukrainian government forces battled pro-Russian separatists in eastern Ukraine not far from the Russian border Monday, as Russia called for the creation of “humanitarian corridors” to allow residents of the region to escape the violence.

Seleznyov said the military called for an air strike, but the aircraft were unable to fire on rebels, who had taken positions near civilians in a nearby residential building.

As soon as the air assault began, he said, rebel fighters hid in the residential building near their base. As soon as the strike was called off, the rebels left the building and began shooting again.

The battles lasted into the day on Monday, leaving as many as seven people dead

Russian news agencies reported that five people were killed Monday when a warplane fired on the regional administration building inside the city of Luhansk, which currently houses officials of the separatists’ self-styled Luhansk People’s Republic. However, the Ukrainian New Agency quoted Seleznyov as denying that there had been an air strike on the building.

Vice President Joe Biden will lead a presidential delegation to Kyiv on June 7 to attend the inauguration of Ukrainian President-elect Petro Poroshenko.

Biden also will hold meetings with Ukraine’s leaders to discuss Poroshenko’s agenda, the situation in the east, and how the United States can assist Ukraine with fighting corruption, strengthening its democratic institutions, and get its economy back on a path toward sustainable growth.

(View of Luhansk by Igor Mazurov/flickr.com)

EU looking for answers to crisis along migrant route