After polls closed in Lithuania’s May 11 2014 presidential elections, incumbent Dalia Grybauskaite was widely seen as headed for a second term, the only question being whether she would face a second-round election on May 25.

Grybauskaite, a former finance minister, former European Commissioner and black belt karate expert, was first elected in 2009 and the 58-year-old has taken a firm line against Moscow amid the crisis over Russia’s illegal actions in Ukraine.

She has said that Europe should understnad that Russia was trying to redraw the post-war map and borders, and has vowed to stand up to any aggression from Vladimir Putin’s Russia, saying, “I’ll take a gun myself to defend the country, if that is what is needed for national security”.

Opinion polls ahead of the May 11 election, in which 2.5 million Lithuanians were eligible to vote, saw Grybauskaite as commanding 40 per cent of support.

Among the seven presidential candidates, two left-wing candidates, Zigmantas Balcytis and Arturas Paulauskas, had only about 10 per cent each.

To win a first-round victory in a Lithuanian presidential election, a candidate needs 50 per cent of the vote with 50 per cent voter turnout.

First reports after polls closed at 8pm Vilnius time on May 11 were that voter turnout had been between 52 and 53 per cent.

If less than half of all eligible voters came out to vote, a candidate is considered elected if getting the most, but no less than a third of the votes of all voters.

In a second-round election, a simple majority is required for victory, with the two candidates being those who got the most votes in the first round.

If there is a second-round presidential election vote in Lithuania on May 25, it will be held simultanously with the country’s European Parliament elections.
(Photo: EC Audiovisual Service) 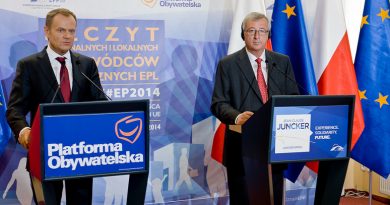