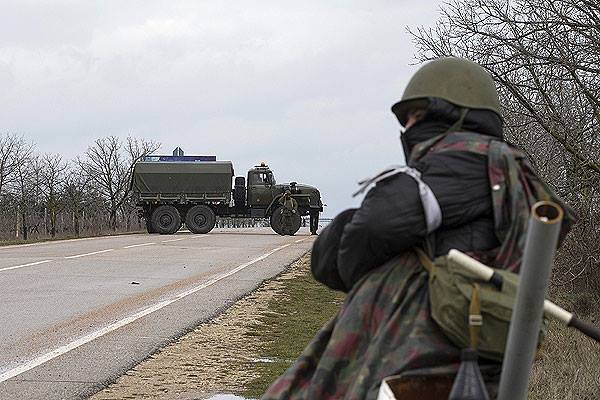 A convoy of military vehicles, apparently Russian, has entered a base near Crimea’s capital Simferopol.

The Associated Press said the vehicles traveled to a military airfield over which a Russian flag flew.

Russia denies it has troops on the peninsula beyond those regularly stationed with its Crimea-based Black Sea fleet.

Earlier Saturday, witnesses say warning shots were fired when pro-Russian forces refused entry to Crimea of an international monitoring team from the Organization for Security and Cooperation in Europe. It was the third day in a row that a team of observers has been refused entry to the area.

The OSCE said via Twitter that the team would return to the southern Ukraine city of Kherson.

Acting Ukrainian Foreign Minister Andrii Deshchytsia Saturday called for a diplomatic resolution and a peaceful end to the crisis, saying Ukraine is open to any possibility that leads to “concrete results,” but emphasized “Crimea is and will be Ukrainian territory.”

Interim Ukrainian Prime Minister Arseniy Yatsenyuk says “no one in the civilized world” will recognize the referendum’s results, but local authorities in Crimea say the ballot will go forward.

The speaker of Russia’s upper house of parliament, Valentina Matviyenko, has said Russian lawmakers will support Crimea’s decision if the Ukrainian region decides to join Russia.

According to a White House statement, the leaders all said Russia is violating international law and agree on the need for international observers in Crimea, and they rejected a proposed referendum on Crimea’s future as a violation of Ukraine’s constitution

Secretary of State John Kerry spoke with Russian Foreign Minister Sergei Lavrov on Saturday, continuing discussions begun in Europe about how to de-escalate the crisis. Kerry and Lavrov agreed to speak again in coming days.

Appeals for US gas

According to news reports from The Associated press and Reuters, four central European countries recently asked the United States to make it easier for them to import natural gas from the U.S. so they can reduce their reliance on Russia.

Ambassadors from the Czech Republic, Hungary, Poland, and Slovakia made their appeal in a letter to the Republican Speaker of the House of Representatives, John Boehner, stating that U.S. natural gas would be welcome in central and eastern Europe and would be a key U.S. interest in the region.

Previous disputes over gas payments between Russia and Ukraine have caused Russia to cut off supplies. The same pipelines that bring Russian gas to Ukraine also supply eastern Europe, creating shortages there.

Cyber security experts say an aggressive virus called “Snake” has been targeting dozens of Ukrainian telecommunications systems, and the number of attacks has surged since January 2013.

BAE Systems, an international cyber security company, announced in a report Friday that it has identified 56 “Snake” attacks worldwide since 2010, and of those, 32 targeted Ukraine. Twenty-two of those attacks on Ukraine have taken place since January 2013, and among those targeted were Ukrainian government networks.

Experts say the virus, also known as “Ouroboros,” for the mythological Greek serpent that eats its own tail, can give operators unfettered access to networks, allowing them to either conduct surveillance undetected or control the system themselves.

The author of the Snake virus is unidentified, but experts say operators appear to be based in the same time zone as Moscow, and there is some Russian text embedded in the code.

Analysts say the virus bears similarities to Stuxnet, the virus that targeted Iran’s nuclear facilities in 2010.

Also Saturday, Polish Foreign Minister Radoslaw Sikorski announced that Poland has evacuated its consulate in Sevastopol because of “continuing disturbances by Russian forces.”

Ukraine’s acting foreign minister has called for a diplomatic resolution and a peaceful end to the crisis in Ukraine.  Andrii Deshchytsia, speaking in Kyiv Saturday, said Ukraine is open to any possibility that leads to “concrete results,” but he emphasized that “Crimea is and will be Ukrainian territory.”

Russia may suspend nuclear arms inspections set down in a treaty with the United States in reaction to Western sanctions over Ukraine, Russian news agencies quoted an unnamed Defense Ministry source on Saturday as saying.

The source, according to Reuters, said the ministry was studying the possibility of  suspending on-site inspections agreed in the Strategic Arms Reduction Treaty (START) between Moscow and Washington.

The United States suspended military cooperation such as joint exercises and port visits with Russia on Monday as Washington sought ways to punish Moscow over its intervention in Ukraine without escalating the crisis.

In the latest version of the START treaty, which was originally agreed in 1991, the United States and Russia pledged  to cap the number of deployed strategic nuclear warheads to 1,550 each and cut their numbers of strategic nuclear missile launchers in half by 2018.

The treaty allows each side to conduct 18 on-site inspections per year in the other country.