Bulgarian President Rossen Plevneliev began on February 13 the “month of political consultations” that he initiated in 2012 with parties represented in Parliament, by meeting MPs from ultra-nationalists Ataka.

But it was clear that Plevneliev and the Ataka members, Desislav Chukulov and Pavel Shopov, had quite different things that they wanted to discuss.

The President, his office said, intended meeting all four parties represented in the 42nd National Assembly to discuss with them their priorities, and to seek consensus on important public issues – incomes, employment and economic growth, the justice and security institutions, administrative reform, e-government, utilities and energy, the state of the media environment, an improved business environment, the European agenda, infrastructure for a modern Bulgaria and reforms in key areas including education, science, innovation, health, energy and security.

Ataka, however, seemed keener on persuading Plevneliev to give up his statutory immunity so that he could be prosecuted.

Led by Volen Siderov, who did not come to the meeting with the President, the ultra-nationalist party frequently has been airing allegations of, among other things, illicit undisclosed offshore dealings and money laundering by Plevneliev.

In 2013, as Plevneliev came under intensifying attack from Bulgaria’s ruling axis and its allied media, he repeatedly underlined that his finances were a matter of public record, as required by law, and there was no wrongdoing.

Since 2012, any meeting involving the President and Ataka has tended to run to the turbulent, including when Plevneliev has hosted meetings which Ataka has no legal right to attend, and the February 13 one ran true to form.

Speaking to reporters before entering the meeting with Plevneliev, Chukulov said that should Plevneliev agree to give up his immunity from prosecution, this would “show that all Bulgarians are equal before the law”.

Chukulov said that Ataka would approach the Prosecutor-General with a dossier which, the Ataka deputy leader said, contained material on “various crimes” that Plevneliev allegedly had committed.

Chukulov said that Ataka’s MPs all had given up their immunity from prosecution – a reference to a theatrical gesure in Parliament after the Prosecutor-General requested the removal of Siderov’s immunity so that he could be prosecuted in connection with a January incident on a flight from Sofia to Varna – and said that they would assure the President there was “nothing scary” about it.

“Whoever is not troubled by anything need not hide behind their immunity,” Chukulov said.

Emerging from the meeting, he said that the “main issue” that had been discussed with the President was Bulgaria’s demographic crisis and what questions should be asked of Bulgarian citizens in a referendum.

“We believe that in a referendum, Bulgarian citizens should decide on issues such as whether Turkey should be admitted to the EU or not. They should be asked about the important things in Bulgaria, not only to limit the topic of voting and how to vote.”

This was a reference to a proposal recently by Plevneliev for a referendum to be held simultaneously with the May 2014 European Parliament elections on key issues in the electoral system, including mandatory voting, electronic voting and a partly majoritarian vote for members of Parliament. The ruling axis of the BSP, MRF and Ataka already has rejected this proposal, accusing Plevneliev of a dastardly plot to distract the electorate.

In the BSP-driven election code that on February 13 continued to undergo its second reading in the National Assembly, the parties in power have rejected a majoritarian element to representation and also have turned down electronic voting and mandatory voting in elections. 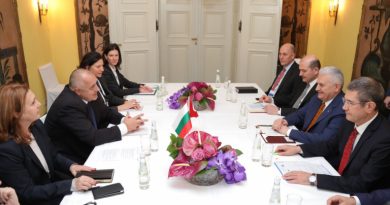