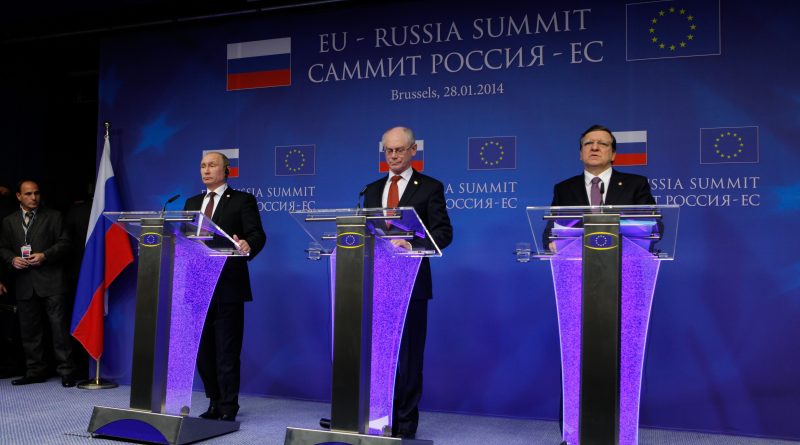 The European Union welcomed a rollback of repressive laws in Ukraine, part of the rapid concessions made by the Ukrainian government in the face of massive anti-government protests.  Events in Kyiv formed the backdrop of frosty talks Tuesday between EU officials and Russia.

Speaking at a joint press conference with Russian President Vladimir Putin, European Commission President Jose Manuel Barroso condemned the violence in Ukraine, which has been rocked by months of anti-government protests.  Barroso offered a guarded reaction to the swiftly moving events in Kyiv, where Ukraine’s prime minister resigned Tuesday and parliament repealed a controversial “anti-protest” law.

“If confirmed this, together with the adoption of [an] amnesty law, will be important steps to de-escalate the situation and to facilitate further steps through political dialogue toward a political solution to the crisis,” he said.

Ukraine cast a shadow over a long-awaited summit in Brussels between the 28-member European Union and Russia, which focused on trade, energy and security issues.  EU foreign policy chief Catherine Ashton was to fly to Kyiv later on Tuesday.

Ties between Brussels and Moscow have cooled as violence has mounted in Ukraine, after that country’s president, Viktor Yanukovych, ducked out of signing a far-reaching political and economic agreement with Brussels.

Instead, Yanukovych struck a deal with Russia to receive cheaper gas and $15 billion in loans; but, speaking through a translator, Putin told reporters that Moscow would uphold the agreement regardless of who held power in Kyiv.

“I will tell you straight away, to answer your question [about] whether we will revise this arrangement on the loan and energy if the opposition comes to power.  No, we will not.  It is not important to us,”  he said.

What counted, Putin said, was a strong economy in Ukraine, so the country could pay Russia back.

Originally scheduled for two days, the Brussels summit only lasted a few hours.  Still, both sides emphasized the importance of closer ties.

Russia and the EU are expected to hold another summit in early June.