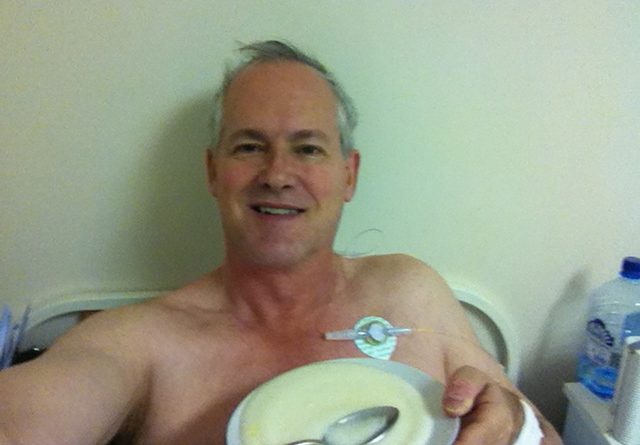 With Obamacare dividing America, I thought it my patriotic duty to do a firsthand, between the hospital sheets, investigation of Putincare.

My weekend at the Cancer Ward did not have the drama of Solzhenitsyn’s 1967 novel. But it had its moments.

I noticed an odd cyst on a normally hidden body part. Alarmed, I took the classic expat step: off to the American Medical Center!

Foreigners like the American Medical Center and its rival, the European Medical Center, because (a) pretty trilingual nurses, and (b) pretty English language invoices that foreign insurance companies swallow without squawking.

The hospital names seem to be labels for marketing to Moscow’s one per cent. As at the Porsche dealership down my street and at the Tiffany outlet up the street, the arrival of a foreigner is an unexpected bonus.

These successful clinics are champions in charging. I once visited EMC to kick a bad cold. Ninety minutes later, I spun out the revolving glass door, my wallet $800 lighter. Their smooth technique put Moscow subway pickpockets to shame.

So when I visited the urologist at AMC, I turned down his offer of a full body MRI. The doctor and I had a bit of a communication problem. He said he had not spoken English in two months. My medical Russian has its limits. After several lab tests, I got prescriptions.

Four months later, the problem continued unchanged. I went back to the same department at the AMC. But there was a new doctor. Where was the first doctor? After a bit of questioning, I learned that first doctor had been let go for “mistakes.” Great, I thought.

Plok! Plok! The new doctor was snapping on his rubber gloves.

This exam seemed to get off the track. He started to talk about his upcoming road trip. Driving down California’s Route 1 through Big Sur. Renting the car alone. Pause.

I suggested that he might start his trip in San Francisco. He might find a nice traveling companion there.

So I switched to the European Medical Center. Two visits. More tests. No MRI. More prescriptions. No progress.

Finally, in August, I got a reminder from a place where Moscow’s cosmopolitan male elite get essential health tips – the medical ads posted above the urinals in the international terminal at Domodedovo Airport.

On my return to Moscow, I Googled around for a normal Russian testing clinic.

Google took me to a street behind the Moscow Zoo. There I found Klinika Zdorovye (Health), and Rustem Gafurov, a quiet, businesslike doctor.

Klinika Zdorovye is efficient: tests on the spot, pay by cash, and get lab results by email.

But, in my case, Dr. Gafurov called me in for my results. All was ok, but for one test.

He used a phrase you do not want to hear in any language: предварительно раковые клетки, or “pre-cancerous cells.”

(Gee, thanks AMC and EMC for wasting my time and money. You can keep the $1,542. But can you give me back my wasted year?)

Dr. Gafurov set up an appointment with a Moscow cancer clinic.

Maybe because it was August, I decided to take the all-Russian road and to surrender my private parts to Putincare.

I did a little internet research on the hospital. It was the same one where Soviets interned Lee Harvey Oswald in October 1959, after he tried to commit suicide in Moscow’s Hotel Metropol. I figured it must be elitnii. Right?

It helped enormously that Anna Klintsova, a Russian-American scientist friend, was visiting. She guided me through the obstacle course of building passes, paying in advance, and meeting doctors who did not use email or cell phones. The PhD on her card got some respect. She translated into English the fine points of photodynamic therapy.

On one hand, Putincare is stuck in the 1970s. My file was a swelling batch of papers, updated by blue pen, and ceremoniously hand carried from office to office. On the other hand, all the professionals had solid Western exposure.

The head anesthesiologist talked excitedly about her upcoming trip to San Diego for an anesthesiology congress. (It sounded like none of the participants would be falling asleep – ha ha).

Her main question was: “Don’t they have fotodinamicheskaya terapia in the United States?”

To which I replied huffily: “This is not “meditsinskiy turizm.”

I added proudly: “I live here.” My heart sank when I detected her rolling her eyes.

I arrived with my big bag, prepared for a weekend of urban camping. I had been told to bring knife, fork, spoon, plate, mug, cup, and bottled water. I added a comfy pillow, battery powered radio, and a 3-meter extension cord for my laptop. (I soon discovered: veefee nyetu – no wifi).

The female martinet manning hospitals admissions looked at my bag. She vetoed it. It was slishkom bolshoi – too big.

After seven years in Moscow, I have learned when to turn on the outrage. And when to save the energy. After 45 minutes of quietly reading my newspapers, I noticed that the admissions room had emptied out.

Me and my big bag rolled in for our Russian Hospital Adventure.

Soon, I was settled into my room and getting acquainted with my new roommate, Sergei. He was a gregarious patent lawyer with a disconcerting circular scar in the center of his forehead.

At 4 pm, I was summoned to the office of the operating doctor.

She brusquely informed me that I had four hours to buy three flasks of photodynamic therapy radachlorine for $1,300 cash. In all of Moscow, there was only one pharmacy that had radachlorine in stock. It was 30 kilometers away, on the highway to Warsaw.

I turned on the irritation, dialing it to medium high. In a concession, she personally telephoned the pharmacy and reserved three flasks in my name.

Scrounging up $1,300 in cash on a four-hour deadline is not easy. Two weeks earlier, I had lost my Citibank card in a mob scene at the opening of Russia’s first Krispy Kreme donuts store. (Different story.)

But, in post-Soviet Russia, hospital lobbies are equipped with cash machines. Robbers in Moscow recently bashed open a cash machine at a vocational college. They stole the ruble equivalent of $51,000. Cash machines in hospitals probably are stocked with triple that amount – and are replenished daily.

By using my Visa card, I milked the money machine for $1,300. Of course Visa pocketed another 6 percent – 3 percent for cash, plus 3 percent for a foreign transaction.

Later, a Russian friend telephoned around discovered that I could have bought three flasks of radachlorine for $800, if I had ordered in advance. Three weeks earlier, the doctor had mentioned that I would have to buy radachlorine. But she did not write out a prescription.

(Hmm, could that be why the pharmacy wanted the name of the referring doctor? But, hey, do you want to irritate the doctor who is going to drill your private parts for 10 minutes with the Photodynamic Therapy Light Beam?)

That evening, Sergei announced he was not going to spend the night in the hospital because they only had state-controlled TV and he wanted to watch “TV Rain,” the opposition channel. So he stomped off.

Peeking from my covers, I thought: whatever.

Danil, the congenial red-haired anesthesiologist greeted me and launched into a long anekdot in Russian about a 100-year-old American man driving in Nebraska, a highway patrolman, and sex. All the while, he prepared two large syringes. I thought: whatever.

One hour later, I was rolled back into Room 1, my room where patients supply their own soap and toilet paper.

Sergei was back. He helped the nurse push my frozen lower frame between the Ministry of Health sheets.

The next two days were a bit of a blur.

There was the nurse who expected all patients to hobble to meals, juggling trays and catheters in the food line. Then, there was Lovely Saida, the nurse from Dagestan with bewitching coal black eyes who came only once to draw blood. (Come back, come back, I have more!)

And there was Sergei who turned out to be a compulsive talker who just would NOT shut up. I would pointedly announce that I was going to take a nap, or bury my face behind a newspaper tent, and he would rattle on and on, not skipping a beat. (If any foreigner wants an intensive conversational Russian language partner, drop me a line).

Sergei also was incredibly generous. His surgery was postponed, so he gave me two large sacks of fresh fruit, which I took home and consumed: grapefruit, apples, bananas, oranges, grapes, plums, and lemons.

On the visitor front, Natasha and Olga begged off on coming to the Cancer Ward. Victoria left for a month in Brussels. Vera brought a chocolate bar, sat one meter from my bedside, and looked tense and pale. Ksenia brought coffee, chicken wrap and tiramisu.

My exit interview with the doctor was brief. She suggested that I take it easy for a month. She said there was a 95 percent probability that I am cured.

She neglected to mention that healing involves excruciating pain.

(Note to cross cultural researchers: outpatient pain control may not be a high priority of Putincare.)

Three weeks later, I drove to the Zoo neighborhood to get a second opinion from Klinika Zdorovye. Dr. Gafurov was out. But his colleague, Dr. David Arutunyan, was up to speed on my case. He gave me a clean bill of health.

And he said the checkup was free. 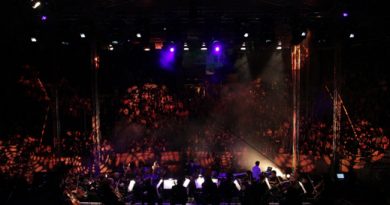 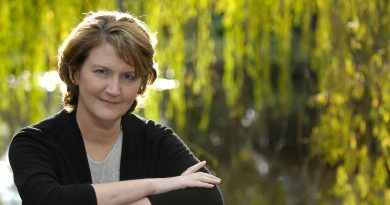