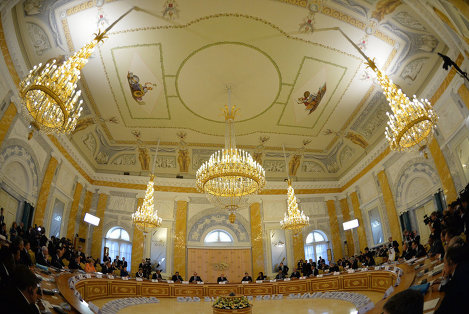 World
September 5, 2013September 5, 2013 VOANews
Leaders of the world’s 20 major economies, both developed and developing, are meeting in the Russian city of St. Petersburg Thursday and Friday to discuss economic and other issues.  The eyes of the international community are on these G20 leaders as they discuss, among other issues, how to end Syria’s bloody civil war.  The world’s economy remains the official number one topic at the annual forum.
For days ahead of the G20 summit, President Obama has urged world leaders to support punitive action against Syria for breaking the international ban on the use of chemical weapons.  But during a stop in Sweden Wednesday, he made it clear that the economy remains his top priority.
“And as I head into the G-20, I shared my view that here in Europe and around the world, we’ve got to stay focused on creating jobs and growth,” Obama said. “That’s going to be critically important not only for our economies but also to maintain stability in many of our democracies that are under severe stress at this point.”
Some people see the two issues as inseparable.
“The dampening of growth is really impacted by what’s happening in Syria, that’s a core G20 agenda, but at the end of the day, G20 has to deliver on the expectations of people in their countries and they’re all looking at the utter impotence of the world when it comes to 2 million refugees, a million of them kids, 100,000 dead in Syria.  So I think it’s inescapable,” said Tim Costello, CEO of World Vision, Australia’s largest charity organization.
Russian political analyst Konstantin Eggert said it is unrealistic to expect any practical decisions on global issues from the 20 nations of different and sometimes conflicting interests. He cited the tense relationship between Russian President Vladimir Putin and U.S. President Barack Obama.
“President Putin doesn’t like, or I would even put it stronger, despises President Obama — sees him as an inexperienced politician, a person too much focused on his own public relations, who has too much trust in ratings and his spin doctors, a person who has changed his Middle East policies twice in the last two years,” Eggert said.
The annual G20 gathering is an opportunity for world leaders to hold bilateral talks on the sidelines of the summit.  But President Obama is not expected to meet with his Russian counterpart.  He cancelled a planned state visit to Moscow last month after Russia granted temporary asylum to fugitive U.S. intelligence leaker Edward Snowden.  Mr. Obama is planning instead to meet with a group of Russian rights activists.
President Putin defended his government’s human rights record on the eve of the summit.
“This year, the funding from government sources of the NGO  [non-governmental organization] activity, including human rights protection, has more than tripled,” Putin said. “More than $100 million were allocated  to implement socially important projects.”
The 20 countries represented at the summit account for two-thirds of the world population and 90 percent of its economic output.
Source: VOANews.com