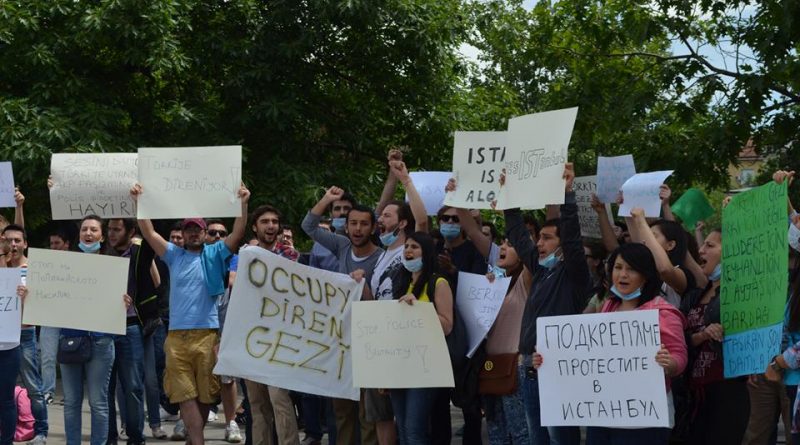 Bulgaria is among European countries where demonstrations have been held in solidarity with the protesters in major cities in Turkey.

In Sofia, demonstrators holding placards gathered outside the Turkish embassy on June 1 while protests also were scheduled for June 1 to 3 outside the National Palace of Culture.

Hundreds of people gathered in Brussels, Madrid and most major German cities in a show of solidarity with protestors in Turkey, euronews said on June 2.

Holding up anti-government banners and chanting “Resign,” the crowds called for Turkish premier Tayyip Erdogan to step down from what many now see as his increasingly authoritarian rule.

Demonstrations against the Turkish government continued overnight and into June 2, as thousands of people took part in a wave of protest in several different cities.

On June 1, the Voice of America reported that police had withdrawn from Istanbul’s Taksim Square, the centre of mass protests. The move came after a second day of clashes between security forces and protestors. The protests, which started over the building of a shopping mall, have turned into a confrontation over the rule of the Prime Minister.

Taksim Square has been the centre of clashes between protesters and security forces. Thousands of demonstrators, many waving Turkish flags, filled the square. The police withdrawal was seen as an attempt to defuse an escalating confrontation, although clashes are still occurring in nearby areas, VOA said.

Throughout June 1, the centre of Istanbul resembled a war zone, with police fighting running battles with demonstrators. Doctors said that more than 1000 people had been injured. Speaking on June 1, Turkish prime minister Recep Tayyip Erdogan acknowledged the police may have used excessive force, but claimed the protest was an attack on democracy.

The clashes erupted on May 31 after police forcibly evicted a peaceful sit-in against the building of a shopping mall in a park in the heart of the city. But public outrage over that crackdown has seen the protest evolve into a wider demonstration against the government.

Many demonstrators accuse the government of becoming more authoritarian. Observers say in the last few months security forces have been cracking down hard on public dissent. Last week the government rushed through parliament a controversial law restricting alcohol use, fuelling fears the Islamic-rooted ruling party is pursuing a religious agenda, a charge it denies, VOA said.