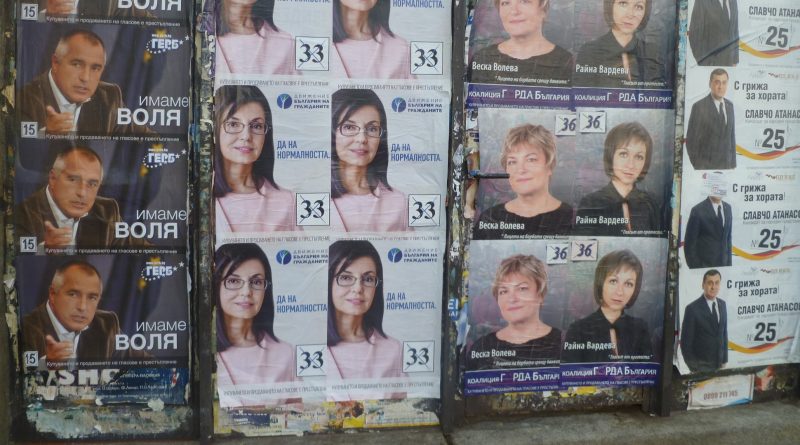 Though the quality of political campaign advertising in Bulgaria has improved, albeit from a low base, the May 12 2013 election is being fought in less in lounges than in the towns and villages.

In this keenly-fought contest, politicians of all stripes are hitting the campaign trail hard. The extent to which the respective parties are getting attention is, of course, a matter of debate.

The daily roundups of events by various parties, shown on the public broadcaster, quite often features tight shots of participants, carefully concealing the paltry turnouts.

This is not the case with the larger parties, naturally, with bigger budgets and better logistics and, quite obviously, more support; to say nothing of the attraction of dull routine being broken by household-name politicians making their four-year pilgrimages in pursuit of votes.

But there is one important respect in which several of the smaller parties distinguish themselves – the creativity of their stunts, or at least noteworthily different approaches to campaigning.

Because the big boys’ stuff is fairly routine. GERB, the Bulgarian Socialist Party, the Movement for Rights and Freedoms, Meglena Kouneva’s Bulgaria for Citizens – talkfests, all of them.

Even some of the photo ops match: Boiko Borissov had face time with Plovdiv Metropolitan Nikolai (the two were photographed together gazing reverently at a gilt-edged Bible), and so recently so did Bulgarian Socialist Party leader Sergei Stanishev. After receiving Nikolai’s blessing, Stanishev strayed into an odd form of secular theology. There was a saying, according to the socialist leader, that vox populi was the voice of God. The ultimate sovereign, Stanishev said, was the people of Bulgaria. Strangely, no counter to this is recorded from Nikolai, who might be expected to take a somewhat more Deontological approach to that issue. 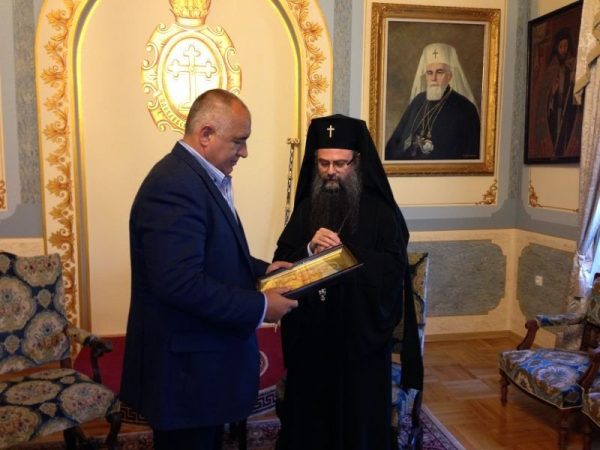 Still with the BSP, a striking sight in the centre of Plovdiv is Café Pri Lambo, a prefab stand extolling the virtues of the socialist candidate list leader in Bulgaria’s second city, veteran acting star Stefan Danailov. Apart from the youthful party faithful ready to exhort the electorate with Nescafe and socialism, the café features window displays of the seven ages of Danailov, stills from several of the productions in which he has appeared. Danailov has a tenuous claim to local hero status; though not from Plovdiv (he was born in that big village 100 miles away that true Plovdivchani look down on – Sofia), Lambo did more than once tread the boards at Plovdiv’s Drama Theatre. 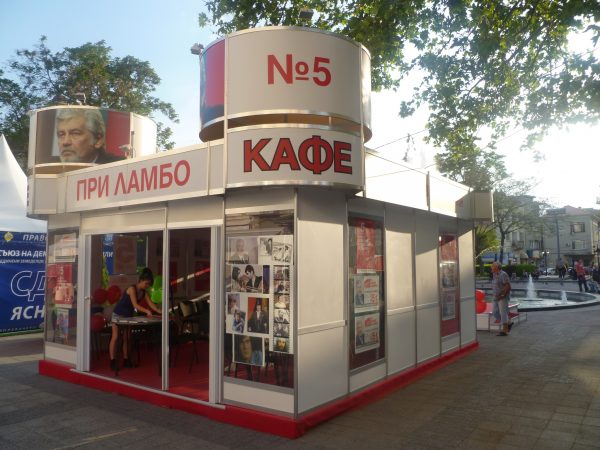 Still with the performing arts, the big parties are competing in song, or at least with singers. GERB has hired Veselin Marinov, while the BSP offers taped folk music and the hits of yesteryear. Volen Siderov’s Ataka has its own specially-written and recorded campaign theme song, which accompanies his television advert. The Movement for Rights and Freedoms re-worked a track that was a hit in Turkey, Shakar Shakar, with vocals by singer Azhda Chausheva and MP Cetin Kazak. The MRF song is on the theme, “for love, for longing, for those feelings”. Polls suggest the party will place third in Parliament. Who knows how it would do at Eurovision.

Kassim Dal, of the Coalition Centre Freedom and Dignity that in large measure is pursuing the MRF’s electorate, was in the town of Shoumen at Easter, to announce a donation of 5000 volumes of scientific literature. The symbolism was, Dal explained, that the coalition had science and education as priorities in its platform.

Siderov’s Ataka has been making one donation after another, as part of what it calls the “Orthodox Solidarity” theme of the ultra-nationalist party’s campaign (it may be redundant to point out that by “Orthodox” they mean “Orthodox Christian”).

Thus Siderov, at Easter, donated funds for the completion of the Sv Georgi church in the village of Mogila in the Stara Zagora region. On Easter Monday, Ataka’s list leader in Silistra, Ivan Dimitrov, was at the home of a seriously ill six-year-old, handing over 2500 leva (about 1250 euro) to the family. In Montana, Ataka list leader Adrian Asenov handed over 400 leva to a family – the husband a physically-challenged former police officer, the wife long-term unemployed – to pay their water bill. In Samokov, Ataka’s Denitza Gadzheva was at the home of a family with three children, of whom two have cerebral palsy. Gadzheva came bearing cash. (In all these and many other cases of donations, Ataka and Bulgarian-language media have made public the names and faces of these families; The Sofia Globe is not reporting them for the sake of the children’s privacy, whatever consent the families may have given to being part of political campaign events.) 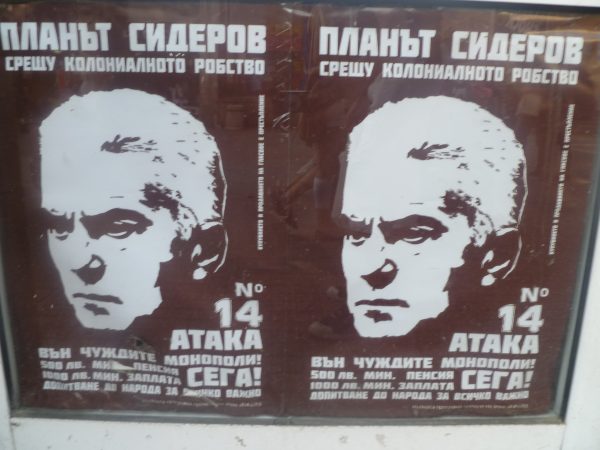 Candidates from the Modern Bulgaria list – a “protesters’ party” – demonstrated for the cameras what they described as the impossibility of accessing Sofia’s Serdica 2 metro station if in a wheelchair. One of the nine candidates who participated in the event is normally wheelchair-bound. Borislav Tsekov told journalists that the fact that access was barred to people in wheelchairs and mothers with prams and strollers was a symbol of “unchecked power”.

Gorda Bulgaria, meanwhile, showed that they were prepared to shed blood for their campaign, with candidates being pictured prone, needles in veins, at a blood donation drive in Stara Zagora.

Tradition of yore in Bulgaria was to feed the electorate sausage and beer, but Easter presented its own culinary opportunities on the campaign trail.

In the seaside city of Bourgas, 10 lambs played a committed role in the traditional stew fed by the Union of Democratic Forces Coalition at an election event.

MRF leader Lyutvi Mestan was there for the feasting at a village in the Haskovo area when Christians and Muslims came together for their traditional gathering in celebrations of holidays which, in the calendars of their respective faiths, coincide.

Nadezhda Sandolova, as a member of the jury, got her face in front of the cameras at an event in Sofia’s South Park that attempted (it is claimed, successfully) to break the Guinness record for simultaneously cooking and colouring eggs. Sandolova, leader of the Democratic Alternative for National Unity, saw the 2500-egg event as an occasion to, well, egg on supporters. Given where the party places in opinion polls, the eggs may prove to outnumber Sandolova’s voters.

Puppet on a chain

In Silistra, socialist supporters displayed, in the village of Chernik, giant puppets modelled on politicians from the GERB government.

A particular attraction was a rather convincing Simeon Dyankov, though the former finance minister will hardly be returning to government, given Borissov’s estrangement from him. Tsvetan Tsvetanov, GERB’s campaign chief and the former interior minister at the centre of the eavesdropping controversy, was a less successful attempt, bizarrely resembling a middle-aged De Gaulle. But then, the BSP had another Tsvetanov moment, when its youth wing went to GERB headquarters to erect a monument to him, depicting a giant ear on a plinth, with the inscription, “I hear your voices”. 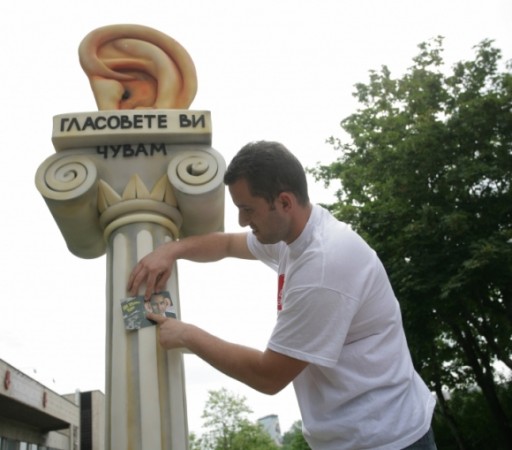 Still on the theme of youth and art, the socialists hosted, near Sofia’s Soviet Army Monument, a street art show with young Bulgarian artists and invited guests.

And all of this cannot end without another egg reference, to the Sofia event by the LIDER party, whose list leader in Sofia’s 23rd electoral district, Paola Nedyalkova, told a microphone that she had gone to three different shops to ensure that the eggs being painted at their event were Bulgarian and not foreign intruders. This was “economic patriotism,” she said.

The coloured Easter egg does make a fitting symbol of the campaign in this year’s Bulgarian election – in multiple colours, hard-boiled, and in some unfortunate cases, slightly cracked. 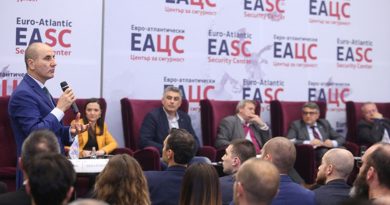