Former British Prime Minister Margaret Thatcher has died at the age of 87, following a stroke.

Prime Minister David Cameron cut short a visit to Spain and France following the news. He said Monday his country had “lost a great leader, a great prime minister and a great Briton.”

The outspoken Thatcher led the Conservative Party to three election victories from 1979 to 1990, the longest continuous period in office by a British prime minister since the early 19th century.

Known as the Iron Lady for her personal and political toughness, Mrs. Thatcher was a stern conservative who broke the power of British unions, eliminated many government subsidies and enabled a far greater role for private enterprise.

She led Britain through its 1982 war with Argentina over the Falkland Islands, strongly opposed European integration and built a close “special relationship” with U.S. President Ronald Reagan that helped spur the downfall of Soviet communism.

The British government said Mrs. Thatcher would receive a ceremonial funeral at St. Paul’s Cathedral with military honors – a step short of a state funeral – in accordance with the wishes of her family. It said a private cremation would follow later, but provided no details on the timing of the service.

U.S. President Barack Obama said America had lost a “true friend” and the world a champion of freedom and liberty.

European Commission head Jose Manuel Barroso paid tribute Monday to her “contributions” to the growth of the EU, despite her reservations about its merits.

(Margaret Thatcher at the funeral of US president Ronald Reagan, one of her closest political allies, in June 2004. Photo: US Department of Defense via Wikimedia Commons) 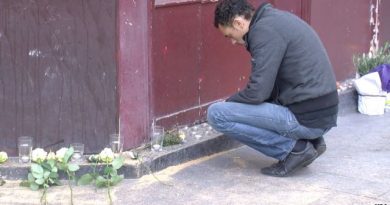