The criticism levelled by opposition Bulgarian Socialist Party leader Sergei Stanishev of the Bulgarian government’s statement that the investigation into the July 2012 terrorist bomb attack on Israeli tourists at Bourgas Airport leads to people connected to the military wing of Hezbollah has won Stanishev a place on the homepage of a Hezbollah website.

It has also brought Stanishev under fire from the centre-right European People’s Party, of which Bulgaria’s ruling party GERB is a member.

The Hezbollah website, in an item illustrated with a photograph of Stanishev – who also is the leader of the Party of European Socialists – quoted the former prime minister of Bulgaria as saying that the “Bulgarian government’s implication of Hezbollah in the Bourgas bus bombing is poorly founded and imperils the national security”.

The site quoted Stanishev as saying that it was obvious that Bulgaria’s government had chosen a “political approach” and was only repeating the interpretation alleged by Israel (a name that the Hezbollah site routinely places in quotation marks) on the day after the terrorist attack.

Stanishev said that the investigation was still proceeding “and there is no way one can be talking about decisive evidence regarding the direct perpetrators, much less regarding the organisation that is behind this tragic event”. 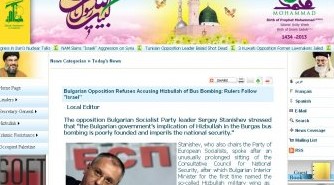 “This is absolutely unjustified in view of national security and the risks that are taken with respect to people in Bulgaria,” Stanishev said.

The socialist leader has not been alone in levelling domestic political criticism. Volen Siderov, leader of ultra-nationalist Ataka, said that Bulgaria had been under pressure from the United States and Israel to blame Hezbollah.

Joseph Daul, head of the EPP group in the European Parliament, congratulated the Bulgarian government on their investigation into the Bourgas Airport terrorist attack, in which five Israelis and a Bulgarian were killed and about 30 people injured.

Daul added: “It was with great dismay I found out today that the leader of the PES, Mr Stanishev, has taken the side of Hezbollah in the debate following the disclosures of yesterday, as one can read on the organisation’s official website. In times of important decisions, when the credibility and responsibility of Bulgaria is being tested, all political leaders should stand together.”

In an interview on public broadcaster Bulgarian National Television on February 6 2013, Foreign Minister Nikolai Mladenov said that no one had ever exerted pressure on Bulgaria to announce findings of the investigation into bombing before the authorities have completed their work.

Mladenov has briefed Arab and EU ambassadors in Sofia on the outcome of the investigation. Sofia has been in contact with Beirut about Lebanese co-operation in the investigation, which has been pledged by Najib Mikati.

The investigation into the bomb attack at Burgas airport has not yet completed, Bulgaria’s Prosecutor General Sotir Tsatsarov said in an interview with public broadcaster Bulgarian National Radio. He said that in April at the earliest the investigators would carry out an experimental test using buses acquired for the purpose to investigate specifics of the fatal blast.

The Hezbollah group has dismissed Bulgaria’s claim that it was behind the bomb attack, the Voice of America said.

Hezbollah deputy leader Naim Qassem said the accusations were part of a smear campaign waged by Israel after it failed to defeat the group militarily.