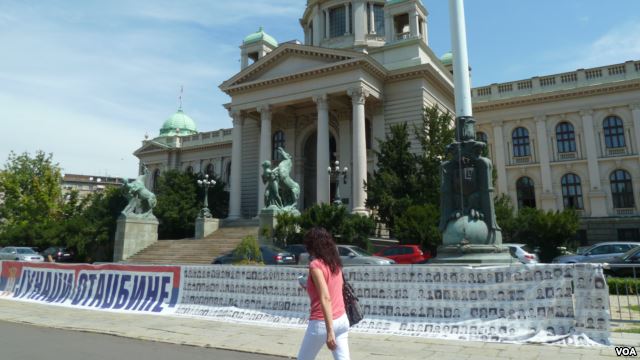 It has been 16 years since Serbia, as part of the former Federal Republic of Yugoslavia, began negotiations to enter the European Union. Some Serbians think the debate has gone too long and the EU’s loss of Britain means it may no longer be worth the effort to join. Serbia’s government says it is not abandoning reforms to improve rule of law, end corruption, and enact regulations to conform with EU trade rules.

Army headquarters and other buildings in central Belgrade that were hit by NATO bombs in 1999 have yet to be demolished or repaired, and serve as a daily reminder for Serbians of war, stagnation, and isolation that followed the breakup of Yugoslavia.

Prospects of joining the EU represent hope for some.

“It will be a better life, simply because it will be peaceful. That is what is needed in the Balkans. War did what war did. We need to find our way again,” said a T-shirt vendor. He said T-shirts with the face of Russian President Vladimir Putin are big sellers these days.

The dream is for Serbia to regain what it lost – a time when Yugoslavia produced things like cutting edge jet fighters.

At Belgrade’s aeronautical museum, broken pieces of American and NATO aircraft downed in the war speak of Serbia’s recent troubled relations with the West. Accession to the EU represents a chance to mend matters and move onto a better, more prosperous future.

But some see the European Union’s efforts to equalize and homogenize economies and standards on the continent as a threat to individuality, tradition, and culture.

“The question is, if Europe is what we are dreaming of, is it a place where all different countries and nations can join like a family or is it a new model of imposing policies that don’t take care about small people?” asked Zoran Petrov, a dairy farmer near Vrsac, 87 kilometers northeast of Belgrade.

Petrov’s farm produces organic, traditional Serbian yogurt, whole milk and cream from free range, grass-fed cows that are of a species native to this part of Serbia.

He has been following the news from Britain. “I deeply believe that Brexit is a strong message from one of the oldest democratic countries in Europe,” he said. “If they say we can’t be in Europe it has to make us think, why is that? Why is that? It means that diversity in Europe is becoming threatened.”

Polls since Brexit indicate more Serbians are now against joining the European Union.

“People here are seeing maybe more than in other parts of Europe, they are growing more Eurosceptic,” said Marko Prelevic, editor of Nedeljnik magazine in Belgrade. “They are growing more worried that the European Union is about to fall because whether that parallel is right or not they are saying ‘we’ve seen this and this is how it starts,’” he said.

Those sentiments are not echoed in Serbia’s parliament, which is dominated by pro-EU parties and the Serbian government has kept up its campaign to promote EU accession with promises of greater equality, respect for the rule of law, and higher salaries.

As Serbia’s leaders vow to continue with reforms, EU officials also say they are determined to keep up efforts to enlarge the grouping despite Brexit and other troubles.

Johannes Hahn, the EU enlargement commissioner, said this week that Brexit “doesn’t mean that enlargement, particularly to the western Balkans, has come to an end.”

But analysts say Brexit has made it harder for Serbian politicians to argue in favor of EU membership.

With the exception of sovereignty, the issues driving the debate in Serbia differ from those in Britain. Serbians largely do not view immigration as a major issue. Trade is also a lesser concern.

“In the area of trade, Serbia and the rest of the region are already highly integrated in the European trading area,” said Jelica Minic of the European Movement in Serbia, a lobbying group.

Minic and others say disillusionment with Europe after Brexit is helping push Serbia closer to Russia and giving pro-Russian groups an advantage. It is a sense that incentives are running out and concerns about overregulation that are driving opposition.

Analysts say if the polls are right, Serbia could see a swing to the right much like other nations in Europe are experiencing. That is also a prediction of pro-Russian groups in Belgrade who believe Moscow has historically been a better friend to Serbia than the West.

Jugoslav Kiprijanovic, a spokesman for the pro-Russian Dveri movement, said his party – a tiny minority in parliament – is raising its calls for a referendum on EU membership.

“When Britain could do a referendum, what is the problem in asking Serbian people after 16 years of waiting, of moving toward the European Union and we still don’t see when we’ll get there?” he asked.

Macedonia’s former PM Gruevski breaks his silence in a TV interview: ‘One day I will return’