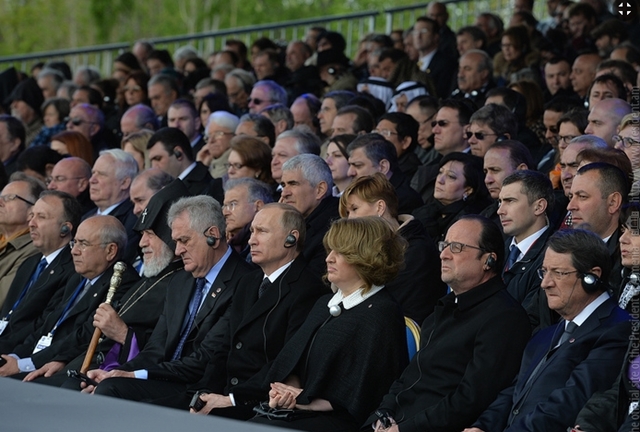 Thousands of people and several world leaders gathered Friday in Armenia to mark the 100th anniversary of the World War I killing of Armenians by Ottoman Turks.

In the capital, Yerevan, they visited a memorial: a hilltop monument leaning in toward a flame set in a sunken bowl. Each of several world leaders laid a yellow carnation on a forget-me-not wreath, the anniversary symbol.

Speaking under cloudy skies at the site of Armenia’s permanent memorial, Armenian President Serge Sarkisian said the presence of the presidents of France, Russia, Serbia and the Greek-ruled part of Cyprus confirmed their commitment to human values by indicating nothing is forgotten.

Armenia, a country of 3.2 million people, refers to the 1915 killing of at least 1 million Armenians as genocide. Turkey acknowledges that many Christian Armenians were killed in fighting during the war but denies it amounted to genocide.

The Armenian president expressed hope that recent steps to recognize the massacre as genocide will help “dispel the darkness of 100 years of denial.”

French President Francois Hollande said France, which is home to a sizable Armenian community, would never forget the loss of the Armenians killed by Turks who believed the Armenians might side with the enemy, Russia, during the war.

He said he came to the ceremony “to contribute also to appeasement, to reconciliation and to moving forward, because the memory should not be used to divide, but to unite.”

Russian President Vladimir Putin also spoke, saying there can be no justification for mass murder.

In Istanbul on Friday, Turkish President Recep Tayyip Erdogan repeated his condolences to the victims’ descendants, without calling the killings genocide.

“We respect the suffering of our Armenian brothers. … We are in no way opposed to the commemoration of this pain. …  We felt indebted to attend this service,” said Volkan Bozkir, minister in charge of Turkey’s relations with the European Union.

Bozkir, speaking outside the church, was careful to put the killings in a wider context. World War I, he said, was “one of the most destructive and bloody wars in the world, and it has seen a lot of tragedies. One is also the tragedy seen in this part of the world, but of course we have to look at the common memory.”

Elsewhere in Istanbul, there were an unprecedented number of commemorations organized by Turkish and Armenian groups to recognize the mass killings as genocide.

About 100 people gathered outside the home of one of the dozens of Armenian intellectuals who on April 24, 1915, were rounded up by the Ottomans.

“This is our common history and we need to pay tribute to the people we have lost,” one attendee said. “This is someone who lived in Istanbul who was part of my culture. These intellectuals were my family, in a way.  As an academician, I feel like they are part of my extended family, and this why I am here; I mourn their loss. I feel like everybody who is part of this culture, regardless as Armenian or not, should own their past.”

Officially, however, Turkey formally protests against any government that calls the killings a genocide. It recalled its representative to the Vatican earlier this month after Pope Francis called the Armenian massacre the first genocide of the 20th century.

The European Parliament, France and others call the killings genocide, while the United States and some other countries have refrained from using the term.

U.S. President Barack Obama released a statement Thursday in which he commemorated the killings, calling them a “massacre,” “a terrible carnage” and “horrific violence,” but did not use the word genocide. The statement raised the ire of U.S.-Armenian interest groups, who said the president should have taken a stronger stand.

On Thursday, German President Joachim Gauck for the first time called the killings a genocide and said Germany bears some of the responsibility.

Gauck said at a service in the Berlin Cathedral that as a wartime ally of the Ottoman Empire, German soldiers took part in planning and implementing deportations of Armenians.

“Women, men, children and the elderly were indiscriminately sent on death marches, banished without any protection or food to the steppe and the desert, burned alive, chased, beaten and shot to death,” he said. “This planned and calculated criminal act targeted Armenians for a sole reason: because they were Armenians.”

The Armenian church granted sainthood to the victims during a service Thursday in Echmiadzin, a town that provided sanctuary for those escaping the killings.

VOA’s Doran Jones contributed to this report from Istanbul.

Report: New HIV infections on the rise in Eastern Europe