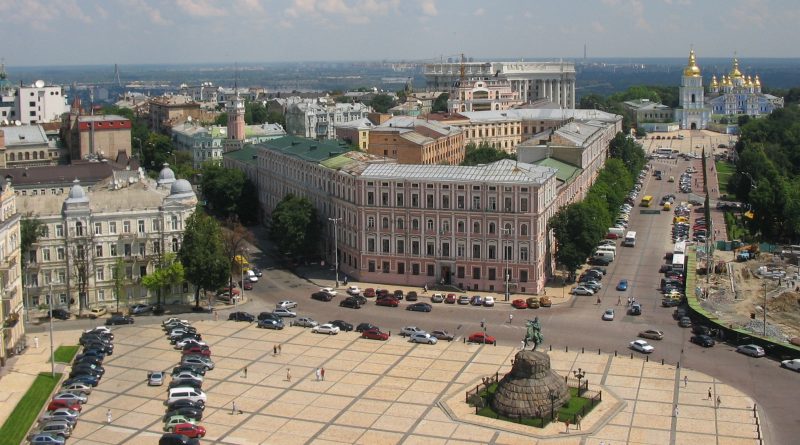 President Putin’s advisor on economic integration warns Ukraine a move to the European Union would be “economic suicide.”

A close friend of Russia’s president floods Ukraine’s capital with billboards warning EU association is a ticket to gay marriage.

From steel to chocolates, Ukrainian products are held up at the border with Russia, Ukraine’s largest trading partner.

The Kremlin has woken up to the fact that Ukraine, seen for centuries as a cradle of Russian culture and religion, may be on the verge of taking a decisive step out of Moscow’s orbit.

At stake in this increasingly tense East-West tug-of-war, is a nation the size of France with 46 million people, nearly one third the population of Russia.

Maxim Trudolyubov, editorial page editor of Moscow’s Vedemosti newspaper, warns the Kremlin will take reprisals if Ukraine signs an agreement of association with the European Union at a November 28-29 summit meeting in Vilnius, Lithuania.

“On the face of it, it looks like the Kremlin will be very tough on Ukraine, and they can do a lot of things, they can do terrible things,” said Trudolyubov, whose newspaper is politically independent.  “But, on the other hand, from the long perspective, of course, it is not in the Kremlin’s interest to harm Ukraine in any serious way.”

At the Vilnius meeting, four former Soviet republics were expected to sign or initial agreements with the European Union. One, Armenia, folded in face of heavy Russian pressure.  It agreed to join the Eurasian Economic Union, the rival trade group administered by Moscow.

The other three – Ukraine, Moldova and Georgia – are on track, for now.

The big prize is Ukraine, the second most populous former Soviet republic, after Russia.

Sergei Mikhailov, an analyst at the Russian Institute of Strategic Studies, warns the European Union is too broke to give Ukraine and Moldova the kind of infrastructure support doled out in earlier expansions.

“Bulgaria and Romania are two countries that show the risks,” he said here.

Russia’s pressure is taking its toll.  Ukraine’s parliament has missed three deadlines to pass laws required by the European Union.  The fight is expected to go right down to the wire, the day the meeting opens in Lithuania.

But public opinion and Ukraine’s political calendar may be on the side of Ukraine choosing Europe.

In a poll last month, 45 percent of Ukrainians favored the association agreement with the European Union.  This is three times greater than the 14 percent who wanted to join the Moscow-led economic bloc.

Dmitri Trenin, director of the Moscow Carnegie Center, sees Ukraine and Moldova’s move to integrate with Europe as a natural, positive evolution.

“This will be an important stimulus to the modernization, not just of their economies, or political and legal systems, but also of societies,” he said in Moscow.  “So I see it as hugely important and, on balance, very positive.”

Last week, Ukraine suspended imports of Russian gas until the end of this year.  This is possible because of warm weather, an expanded gas storage system, and pipeline changes that allow Ukraine to import gas from Europe.

Vygaudas Usackas is a Lithuanian living in Moscow.  He is the E.U. ambassador here and says the deal could benefit Russia: “It will also have, I hope, a strong impact towards Russia, which is the most immediate and closest neighbor of Ukraine, benefiting from that pathway towards European values, governance, accountability and economic diversity of the systems we all embrace.”

The coming days will tell: whether Ukraine stays East, or goes West.

Bulgaria’s ‘United Patriots’ continue to be united in name only