Turkish police in Ankara and Istanbul have fired tear gas and water cannons to disperse thousands of protesters early Sunday, the 10th consecutive day of unrest.

Late Saturday in Ankara, protesters slowly moved closer to the U.S. embassy, burning barricades nearby as clashes broke out with police.

In Istanbul, thousands of demonstrators continue to occupy the city’s central Taksim Square, marching, chanting and raising signs that call for the prime minister to step down. Protest-related violence has killed at least three people and wounded thousands since the demonstrations began.

The protests were sparked more than a week ago by government plans to tear down a public park in Istanbul for new construction.  Mr. Erdogan has so far refused to scrap those plans.

Demonstrations have taken place in major Turkish cities in response to what a growing number of Turks see as Mr. Erdogan’s authoritarian government. 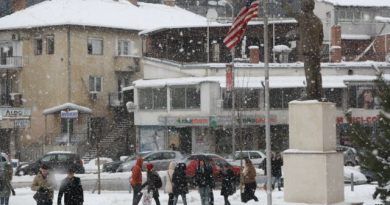 Love for Clintons lingers in Kosovo, as country awaits US elections

European Parliament to vote on resolution on Poland