Grigor Dimitrov lost in the third round of the Australian Open to Roger Federer on January 22, his sixth consecutive first-week exit at a Grand Slam since reaching the Wimbledon semi-finals in 2014.

It was his second loss to Federer this year, after the quarterfinal exit in Brisbane earlier this month, although on both occasions Dimitrov managed to win a set off the former world number one. For Federer, the 6-4, 3-6, 6-1, 6-4 win was his 300th at a Grand Slam tournament, the most by any male player and closing in on Martina Navratilova’s all-time mark of 306, according to ATP’s website.

The match served as another reminder for the frequent comparisons between the two players, who have a similar style of play, with Federer saying his post-match comments that playing Dimitrov was not unlike playing himself. Both players made frequent surges to the net in the match, with Federer winning 29 of 40 net approaches, while Dimitrov won 17 of 25.

Neither player was at his best, however, as the two combined for 99 unforced errors (55 for Federer and 44 for Dimitrov), but Federer compensated by hitting 48 winners to Dimitrov’s 23. 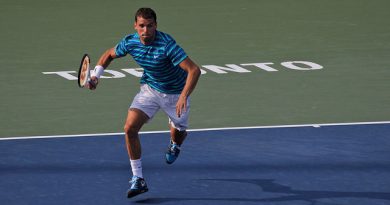 Dimitrov drawn into Federer’s quarter at US Open