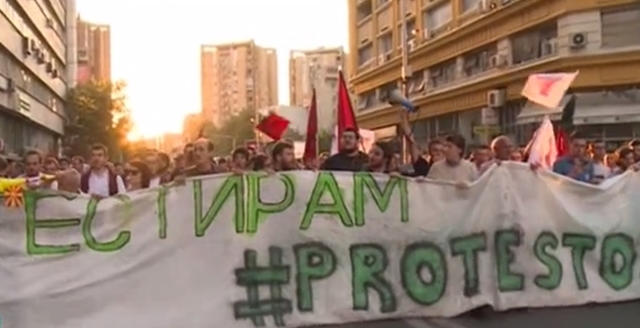 Protesters in Skopje pelted the Macedonian capital’s triumphal arch with stones and eggs on the fifth night of protests demanding the resignation of president Gjorge Ivanov and calling for the appointment of a new administration.

The current protests began after Ivanov announced a blanket amnesty for 56 politicians and officials, including former prime minister Nikola Gruevski, implicated in an illegal eavesdropping scandal.

Tensions frequently escalated on the night of April 16, as police focused mainly on protecting government buildings. Earlier this week, the office of Ivanov was attacked and ransacked. In spite of the tensions and periodic confrontations, the April 16 protest ended peacefully. 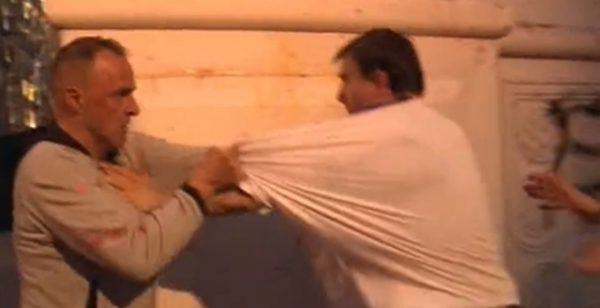 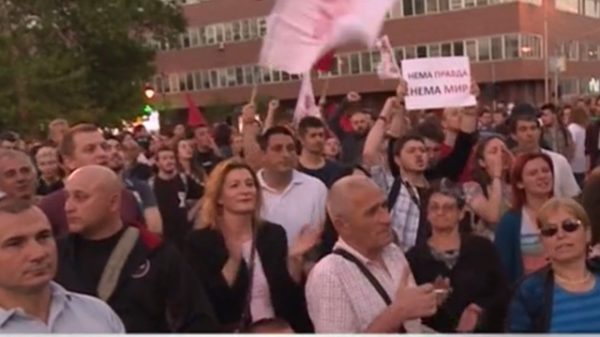 In the Macedonian capital, protesters spray-painted messages on walls calling for political change and directing obscene messages against the current administration. Protesters’ chants included “no justice, no peace” and “criminals behind bars”.

Zoran Zaev, leader of the opposition SDSM, appeared in the midst of the protests, reiterating to reporters that his party would boycott the early elections called for June 5 2016. “It’s a matter of either Gruevski or Macedonia. We choose Macedonia,” said Zaev, who insists that it would not be possible for the June 5 elections to be free and fair.

The administration in place since Gruevski stepped down as prime minister as part of an EU-brokered 2015 political deal is insisting that the early elections, already postponed from an earlier intended date, will go ahead. They already have invited international observers.

Protesters want the elections postponed and a new caretaker government composed of technocrats appointed. The protesters say that they will not back down until all their demands, including the resignation of Ivanov, are met.

Reports from Bitola said that police sealed off the building of the local municipality. Protesters tried to break through the cordon, with clashes resulting.

Gruevski submitted his resignation in January 2016. Head of the ruling VMRO-DPMNE party since 2003 and Macedonia’s prime minister since August 2006, the submission of his resignation was a consequence of the June 2 2015 agreement that had been worked out to end end Macedonia’s political crisis that had begun with a boycott by SDSM of parliament after the opposition socialist party said that Gruevski had stolen the 2014 elections, a crisis that deepened with allegations of large-scale illegal eavesdropping by Gruevski’s government, and that saw the country experience further turbulence after a violent and fatal clash between police and an ethnic Albanian armed group in May.