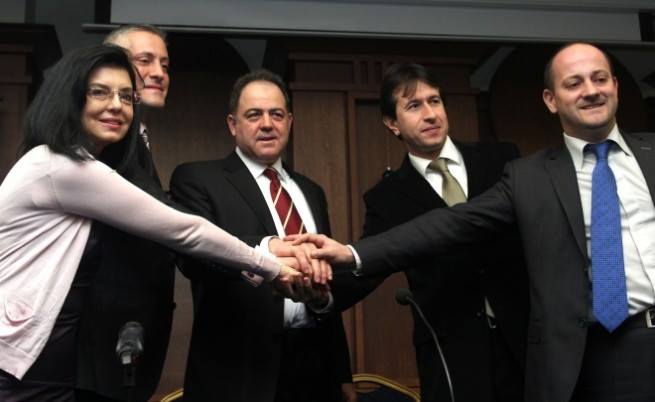 Bulgaria’s centre-right Reformist Bloc, a group of five parties, launched its parliamentary election campaign on September 14 – but without holding a leadership election after plans to do so were brought down by internal squabbling.

Formally founded as a political coalition in late 2013, the Reformist Bloc won one of Bulgaria’s 17 European Parliament seats in May 2014 and, ahead of the October 5 parliamentary elections, initially planned to elect the bloc’s first president.

There was a dramatic twist in August when Radan Kanev stepped down as the bloc’s spokesperson, a development seen at the time as a sign of internal fractiousness over the Reformists’ approach to post-election coalitions with other parties, notably Boiko Borissov’s centre-right GERB, the party seen as having the best chance of winning the most votes in October.

But in the final days before the planned September 14 simultaneous launch of the election campaign by the Reformist Bloc (belated in comparison with major political forces that launched their campaigns around the time of the official start of the campaign period on September 5) and the leadership election, bloc members Bulgaria for Citizens and the Union of Democratic Forces torpedoed the plan for the leadership election.

In effect, Meglena Kouneva’s Bulgaria for Citizens and Bozhidar Lukarski’s UDF threatened to boycott proceedings on September 14 unless the leadership question was postponed to November 10.

In the 2014 European Parliament elections, there was a reverse for Kouneva, who was Bulgaria’s first European Commissioner and a failed national presidential candidate in the 2011 elections, when she was displaced from the number one spot on the Reformist Bloc ticket through preferential voting.

Kouneva’s party and the UDF argued that holding the leadership election now would weaken the bloc and reduce the votes it would win in October.

The Bulgaria for Citizens and the UDF were prepared to take part in electoral procedures within the bloc only if there were clear rules, specified powers of elected officials and guaranteed control by the constituent bodies.

These conditions had not been met by the time of the eve of the planned election, the two parties said.

Matters on the eve of the September 14 congress and election campaign launch were compounded when the People’s Party Freedom and Dignity, a bloc component member, also signalled that it wanted the congress postponed.

On September 14, at the opening of the Reformist Bloc event, Radan Kanev – who had been seen as the strongest candidate in the bloc leadership race – announced that he was withdrawing his candidacy.

Kanev said that personal ambitions were not important, and nothing was more important to the public interest than a victory for the bloc in the October parliamentary elections.

It was not his leadership that mattered but the leadership of the Reformist Bloc in Bulgarian politics, Kanev said.

He said that Bulgarian voters wanted the radical and bold change that only the Reformist Bloc could give them.

Kanev said that the bloc’s priorities were profound change to the justice system, an end to corruption, the opportunity to become wealthy honestly and an end of party intervention in key sectors. He told his audience, “none of you in this room should rely on any of us on the platform to get a job”.

An Alpha Research poll, the results of which were released on September 9, said that the Reformist Bloc was in fourth place among support for political parties and coalitions, with 5.2 per cent – enough to win seats in Bulgaria’s 43rd National Assembly.